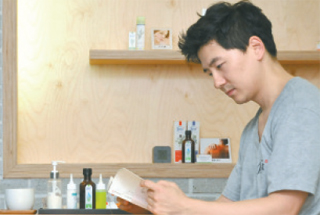 In addition to shifting views on family, more young people are also seeing marriage as optional, a greater pile of research has shown in recent years. In the survey conducted by the JoongAng Ilbo, 8 percent of respondents in their 20s answered that they will not marry.

Kim Seung-wan, 35, also shares that view, preferring the quality of his life as a bachelor.

On a typical day on Aug. 20, he woke up to his alarm at 5:30 a.m. Kim has lived alone for five years and has become used to waking up alone. He starts his day at a nearby CrossFit gym and works out for an hour before going to his office.

Kim works in the planning department of a large enterprise that makes cosmetic products. He usually has breakfast and lunch with his co-workers at nearby restaurants, and though he would prefer a warm cooked dinner, there are few restaurants a single man can go alone.

“Having a meal alone [in Korea] is often considered embarrassing because many restaurants set a minimum of two customers per table,” he said.

Kim typically finishes work around 6:20 p.m. Sometimes he opts to get a full-body massage at a salon near his office, a luxury he indulges in about once a week. “Nothing is as good as a full-body massage when you want to get rid of stress,” he said.

On the way home, when asked what he thinks about marriage, Kim answered, “I’m not thinking of getting married soon, because the value I get from marriage doesn’t seem to be better than the value I have right now.”