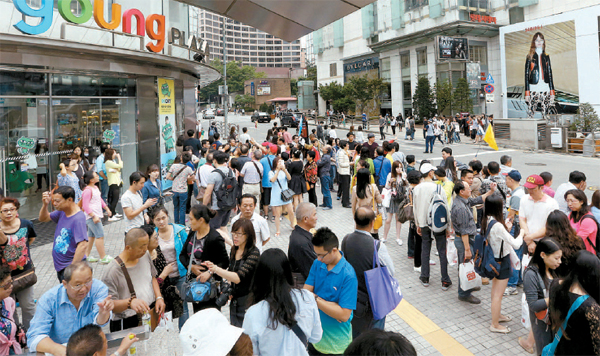 
With Chinese tourists already a major part of Korea’s economy, local retailers hope to cash in big on the Incheon Asian Games and Chinese National Day in early October.

Even without the sporting event, the number of Chinese tourists is rising annually, mostly because the two countries are so close.

According to the Korea Institute for Industrial Economics and Trade, about 4.3 million Chinese tourists visited Korea last year, and the number is expected to reach six million this year.

“These tourists led to the production of goods worth about 13.4 trillion won [$12.83 billion] last year,” says Park Moon-su, a research fellow at the institute. “The visitors also generated jobs for 126,000 people in areas like shopping and accommodations.” 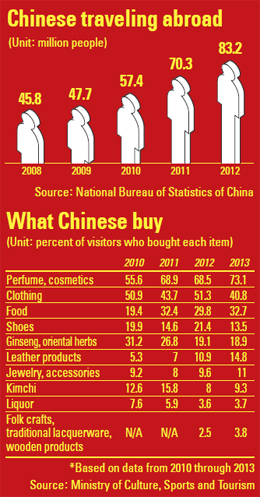 In particular, their contribution helped boost the domestic market at the end of the first half, after the economy had plunged in the wake of the Sewol ferry sinking.

Chinese tourist spending at must-visit places like department stores and Jeju Island have given those destinations a prosperous first half of 2014, while large discount stores and traditional markets, which are mainly frequented by Koreans, suffered.

Tourists also contributed to reinvigorating little-used regional infrastructure, such as Yangyang International Airport, east of Seoul in the coast in Gangwon province. It had been nicknamed “ghost airport” because it was used so little.

But the nickname is no longer relevant. Almost 152,000 non-Koreans traveled through the airport from Jan. 1 to Sept. 22, about 5.2 times more than the same period last year. This is a remarkable change, considering the cumulative 115,000 foreigners who passed through since the airport’s reopening in 2010 until last year.

Of those, 98 percent of arrivals were Chinese tourists, as Yangyang was granted transfer airport status in April, allowing visa-free visits of 72 hours. Ten new routes were launched to connect China to the province; previously there was just one regular route from Shanghai.

According to data compiled by the Gangwon provincial government, tourists spend an average of 248,000 won during a two-day visit, which might include stops at Mount Seorak, Naksan Beach and Gyeongpodae Beach.

Gwangju, which is rarely visited by Chinese tourists, recently started a campaign attract them. Mayor Yoon Jang-hyun, who was elected in June, designated it one of his administration’s core projects. For his first trip in office, Yoon went to Beijing to discuss potential projects between Gwangju and tourist agencies.

At Korean duty free shops, about 50 percent of sales are to Chinese tourists.

Lotte Duty Free saw 24 percent year-on-year growth in the first half, with Chinese customers accounting for 50 percent of sales, compared to 45 percent a last year.

The store has held K-pop concerts for foreign customers. At an Aug. 29 concert, the company held a fan meet-up with actors Kim Soo-hyun and Park Hae-jin, who are famous for the K-drama “My Love From the Star.” The fan event drew almost 16,000 Chinese visitors.

Korea’s two largest duty-free shops, Lotte and Shilla, are offering big prizes during the Incheon Asian Games and Chinese National Day holiday. Lotte Duty Free will give away an apartment at the Lotte Castle complex in Shenyang, China. Shilla Duty Free will give a round-trip ticket to Seoul and a meal with Korean actor Lee Jong-suk.

Lotte’s Sogong-dong branch gets 16.5 percent of its annual sales from Chinese customers, the highest percentage of all Korean department stores.

The branch held a special brand collection, which only consists of Korean apparel brands most favored by Chinese customers, from Sept. 17-21. This section took up almost half a floor at the department store. The company decorated it with gold dragons and red pillars to make customers feel at home. Some said the decoration would make Korean shoppers uncomfortable, but department store sources say Lotte Shopping CEO Lee Won-joon aggressively pushed the project, a sign that Chinese buyers are as important as locals.

This year, the hotel industry’s attitude toward Chinese customers has also gotten a lot more hospitable.

Over May Day weekend this year, Lotte Hotel Seoul sold a chicken and beer set for its Chinese guests, who accounted for 23 percent of its customers in the first eight months. The hotel is located near Myeong-dong, downtown Seoul, a popular shopping and sightseeing area.

In the first eight months of the year, almost 75.9 percent of all guests at Paradise Casino, in Gwangjang-dong, eastern Seoul, were Chinese tourists. VIP Chinese customers bet about 837 billion won in the second quarter.

To better serve deep-pocketed customers, Paradise runs a shuttle bus from nearby airports to the casino and occasionally holds Chinese-only events. Tourists to Seoul during May Day and National Day sat down to a dinner show featuring popular Chinese singers, and the casino also holds a biweekly baccarat competition for Chinese guests.

About 43.2 percent of sales at Korean casinos, which are only open to foreigners, are from Chinese customers. This is expected to increase to 67.5 percent in 2020, Hana Daetoo Securities predicted in a report.

But the actual economic impact of the tourists is not as great as their numbers, because 75 percent come to the country as part of a package tour and are less likely to spend as much as wealthy independent visitors.

Though they have money, many Chinese don’t spend it in Korea, partially due to the language barrier. There are not many Mandarin speakers or signs in Chinese.

“Several travel agencies based in China divide up the tourists among themselves, and they dominate the tourism market here,” says a Jeju-based restaurant owner. “When we give them a commission of 30 percent to 40 percent on purchases, we end up with nothing.”

“Every year, more than 100 million Chinese tourists travel the world spending more than 100 trillion won,” says Seo Yong-gun, a tourism management professor at Jeju National University. “Instead of relying on shear numbers of tourists, Korea should come up with a strategy that can generate more profit to local tourism industry members.”

Korea should encourage tourists to visit destinations outside of Seoul, he said, adding that local culture festivals, more casinos and leisure facilities could help.

In addition, Seo explains that shopping categories should be more diverse.

As of now, the three most popular items purchased by Chinese tourists are perfumes and cosmetics, clothing and food. According to data from the Ministry of Culture, Sports and Tourism, some tourists also buy ginseng, Korean-grown oriental herbs, leather products and shoes. Seo also predicted that child and toddler products as well as plastic surgery services will remain popular

But the most popular products are related to Hallyu, usually items worn by K-pop idols or actors in dramas.