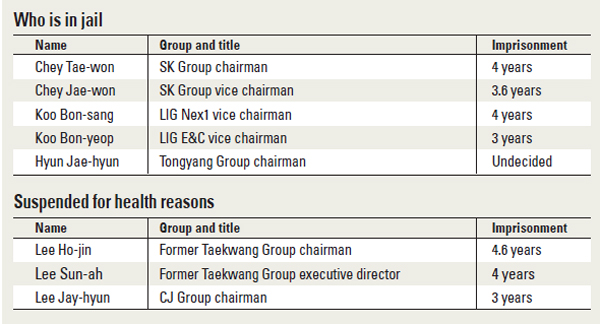 The downturn of the Korean economy is getting so serious that top government officials are considering releasing business moguls behind bars for economic crimes.

Last week, Choi Kyung-hwan, deputy prime minister for economy, raised the possibility of special pardons to owners or family members of conglomerates in jail on convictions of economic crimes such as embezzlement, breach of trust and incurring losses to their companies.

“Punishing businessmen with excessively stringent penalties is no help when it comes to economic recovery,” Choi said Thursday. 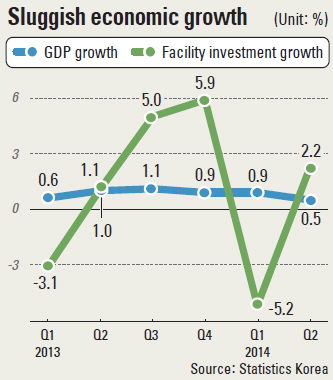 The remarks by two powerful ministers are expected to spark a controversy.

Speculation is that Choi’s comment stemmed from his highly negative evaluation of the current economic situation.

Although his economic team launched in July is mobilizing Korea’s largest-ever expansionary fiscal policy to boost the economy, the effect of the policy on the domestic market has been disappointing.

According to data from Statistics Korea, private consumption retreated 0.3 percent from April through June, the biggest quarter-on-quarter decline since March 2011.

The country posted 0.5 percent GDP growth in the second quarter, the weakest in 21 months.

A month ago, Choi said the economy is approaching the early stage of deflation, in which consumer prices decline. That brought an immediate backlash from economists.

Two weeks ago, Choi corrected himself, saying the economy is in a disinflation state in which the growth of prices slows.

“The minister seems like he believes the absence of the heads of major conglomerates is making businesses hesitate about making large investments,” said a senior government official at the Ministry of Strategy and Finance.

As soon as Choi took office in July, he met with the heads of the nation’s five business lobby organizations to prod them to start making investments and increase employment.

Currently, more than 10 chaebol members are behind bars or on bail for economic crimes.

While conglomerates are excited about the prospect of their executives being released, they also worry it would only strengthen the public perception that the wealthy get preferential treatment.

However, these conglomerates are claim that return of their chairman could at least expedite large investment decisions. Without their chiefs, companies said, opportunities for expansion have been missed.

For SK Group, the imprisonment of Chairman Chey Tae-won, who is serving four years for embezzlement, has delayed its plan to expand overseas.

According to the nation’s third-largest conglomerate, Chey was scheduled to have a business trip to Southeast Asia countries in February 2013 to discuss business opportunities for the group’s IT affiliates SK Telecom, SK C&C and SK Broadband.

He also planned to visit Central and South America the same month, but everything was shelved when the 58-year-old was jailed on Jan. 31, 2013.

While Chey is behind in bars, SK Group has made no aggressive moves such as acquiring companies like STX Energy, ADT Caps and Australia’s United Petroleum.

Industry observers speculate that Chey would be the top candidate to receive amnesty. The SK Chariman also is legally eligible for parole as he has served a third of his sentence. He has stayed more than 600 days in prison, the longest of any chaebol executive.

CJ Group also claims that the absence of Chairman Lee Jay-hyun, who is serving a three-year prison term handed down by an appeals court for creating slush funds, also has delayed its investments. Lee is appealing his sentence to the Supreme Court. The nation’s 14th-largest conglomerate said it planned to invest 1.37 trillion won in the first half of this year, but 480 billion won of that has not been spent.

It was reported that CJ Korea Express, the nation’s top parcel service provider, planned to invest billions of won to set up a logistics terminal in the center of the country. That project was put on hold.

CJ Group, which focuses on the food and entertainment business, increased its domestic investment from 2010-12, but with Lee going to jail in July 2013, the scale of its investments shrank. Last year, CJ Group invested 2.6 trillion won, 20 percent less than it had originally planned.

What’s making matters worse for the group is that Lee’s health is deteriorating. He is currently hospitalized.

“The CEOs of affiliates are trying their best to manage and business performance appears to be good, but the real problem is that fostering our next growth engine has stopped because of the chairman’s absence,” said a high-ranking executive from CJ Group.

Other conglomerates with chairman facing trial, such as Hyosung, Tongyang and Woongjin, hope that a forgiving atmosphere could lead to positive rulings.