Moon reaches out to Saenuri

Moon reaches out to Saenuri 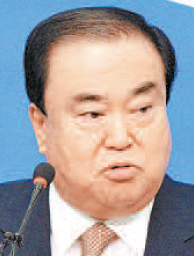 Seeking a turnaround in a prolonged political gridlock over a special law to investigate the sinking of the Sewol ferry, the New Politics Alliance for Democracy (NPAD) leader yesterday proposed a meeting with his Saenuri Party counterpart in order to strike a middle ground.

The ruling party, however, issued a lukewarm response, stating that the opposition should get back to the National Assembly tomorrow for a voting session to legislate the nearly 90 bills that are stuck in limbo before making such demands.

“It is now time for the National Assembly to resolve the Sewol issue. I sincerely wish the Assembly could untangle all issues [related to the special law] by this month and normalize the parliamentary activities starting from Oct. 1,” said Moon Hee-sang, an interim leader of the New Politics Alliance for Democracy, during a press briefing yesterday at the National Assembly, adding that he “urgently proposes an immediate meeting” with Saenuri Chairman Kim Moo-sung.

“The negotiation between the two floor leaders is in a total gridlock with no way out. … I made a proposal out of a sense of urgency to find a way out [of the stalemate].”

“The NPAD asked the Assembly Speaker to postpone the plenary session to the 30th, promising him it will return to the Assembly no matter what. But it seems so far the party is not even planning to hold a party lawmakers’ meeting today [to confirm its pledge to participate in the voting session],” said Kim yesterday.

Pointing out that there are internal feuds within the NPAD calling for different approaches in dealing with the Sewol law, the Saenuri spokesman said the opposition should first unify its opinions before demanding further negotiation with the ruling party.

Moon’s proposal yesterday was seen as his effort to resolve the long-held gridlock over the special Sewol law with his Saenuri counterpart Kim Moo-sung, as the two parties’ floor leaders, Lee Wan-koo of the ruling and Park Young-sun of the NPAD, showed no signs of compromising on their negotiations on the Sewol law’s terms.

The law intends to lay bare the truth behind the April 16 sinking as well as the government’s bungled rescue efforts in the first days of the accident. The country’s worst maritime disaster left 294 dead and 10 are still unaccounted for.

The five-term lawmaker’s proposal for a top-level meeting came two days after the National Assembly held a plenary session that lasted just nine minutes, with pending bills remaining unlegislated because the NPAD boycotted the session and demanded another be held tomorrow.

Despite strong protests from Saenuri lawmakers who had expected to vote on bills without NPAD lawmakers, Assembly Speaker Chung Ui-hwa postponed the session and decided to hold another tomorrow, as requested by the opposition. The session’s closure drew a strong backlash from ruling party lawmakers, and some even threatened to issue a collective resolution to demand that Chung step down.

As of press time yesterday, it remained unclear whether the NPAD will show up for the plenary session tomorrow. The opposition is expected to hold a lawmakers’ meeting today at the National Assembly to gather opinions on whether it should attend the session and vote on bills unrelated to the Sewol law, as demanded by the Saenuri.