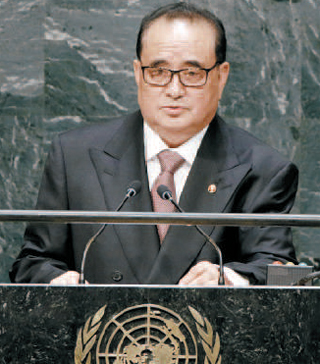 In his first visit to New York in 15 years, Ri has scrambled over the past week to actively rebut criticism from the international community about his country’s dismal human rights record at the UN General Assembly, while also bolstering its presence on multilateral diplomatic issues.

The UN Secretary General’s office said Saturday that Ban “thanked the foreign minister for personally conveying a letter from Mr. Kim Jong-un, first secretary of the [North’s] Workers’ Party.” Ban also showed appreciation for Ri’s participation in the General Assembly “for the first time in 15 years, as a sign of the [North Korean] government’s commitment to the UN agenda,” as well as for attending the UN Climate Summit earlier that week.

While further details of the letter were not revealed, the office said that Ban emphasized concerns about the humanitarian situation and expressed a hope for dialogue to “move toward a denuclearized and peaceful Korean peninsula.” He also encouraged the country’s engagement on international human rights issues, his office said.

“There was no special content in the letter, and it was very courteous,” a high-level UN source told the JoongAng Ilbo. “But it is significant because the North Korean leader communicated with the UN secretary general for the first time.”

The move contrasts with Ri’s lambasting of the United States and the UN Security Council in his address to the UN General Assembly in New York, asserting that his nation’s nuclear issue would be resolved with the “termination of the United States’ hostile polices against the DPRK [Democratic People’s Republic of Korea].”

Over the past months, Pyongyang has upped its diplomatic gestures, with Ri attending his first multilateral conference at the Association of Southeast Asian Nations (Asean) security summit in Myanmar in August, and with Kang Sok-ju, secretary of international affairs of the Workers’ Party, promoting North Korea’s purported human rights values and economic development in four European countries.

A large portion of Ri’s speech at the General Assembly’s 69th session Saturday condemned joint large-scale military exercises between the United States and South Korea, which according to him are in preparation for “occupying the capital city of Pyongyang.”

He then criticized the UN Security Council for its “extreme manifestation of double-standard,” and called it a “forum for telling lies.”

Ri also took the speech as an opportunity to paint a rosier picture of Pyongyang’s attitude towards human rights issues and claimed that North Korea “promotes human rights dialogue on an equal footing with other countries that are not hostile to it.”

At the same time, he criticized Washington’s move “preventing” North Korea’s participation in the ministerial-level human rights talks hosted by Secretary of State John Kerry on the sidelines of the UN General Assembly on Tuesday.

His proactive attitude differed from North Korea’s posture 15 years ago, when Ri’s predecessor Paek Nam-sun addressed the UN General Assembly in 1999. “In the past, North Korea moved quite passively on the UN stage, but this time, it was seen to be proactive,” said Koh Yoo-hwan, North Korea studies professor at Dongguk University.