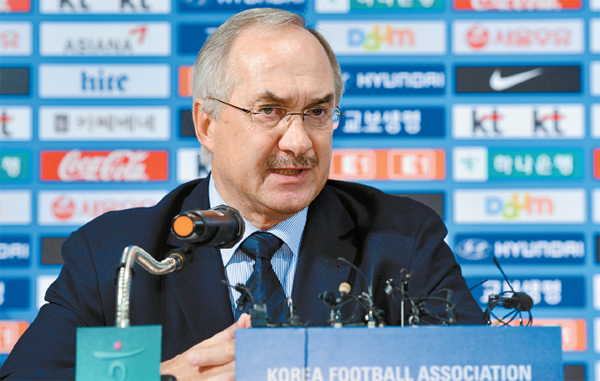 Uli Stielike, the national football coach, announced the squad for his debut matches that will take place next month.

In a press briefing held yesterday at the headquarters of the Korea Football Association in Jongno, central Seoul, the 60-year-old, who became the new Taegeuk Warriors coach last month, announced his 22-man roster, set to play against Paraguay on Oct. 10 and Costa Rica on Oct. 14.

There were few surprises on the roster as he decided to test veterans such as striker Lee Dong-gook of Jeonbuk Hyundai Motors and defender Cha Du-ri of FC Seoul, who shone in the country’s friendlies in September. But one of the country’s best strikers, Kim Shin-wook of Ulsan Hyundai, who is also on Coach Lee Kwang-jong’s U-23 national squad at the Incheon Asian Games, wasn’t selected.

“I selected players who have been leading the country’s football recently and the team will be operated with these players,” Stielike said. “No matter who becomes the new coach, he should start from zero [in developing a team] and the rule applies to me as well. I will try to develop Korea as a stronger team in stages.”

Along with Lee Dong-gook, Kim Seung-dae of the Pohang Steelers, who is playing in the Asian Games, was called up to the team as the other forward. Most players in the European leagues were also selected for the team, including “Sonsational” Son Heung-min of Bayer Leverkusen, Ki Sung-yueng of Swansea City, Koo Ja-cheol of FSV Mainz 05 and his teammate Park Joo-ho, and Lee Chung-yong of the Bolton Wanderers.

Along with Cha, Lee Yong of Ulsan Hyundai, Kim Jin-su of TSG 1899 Hoffenheim, who is playing in the Asian Games, Kim Young-gwon and Kwak Tae-hwi were selected as defenders.

“The reason I didn’t call up Kim Shin-wook was because I haven’t seen him play lately,” Stielike said. “He is also suffering from a minor injury that sidelined him for two matches.”

The coach also briefly told reporters how he intended to run the team, saying that he would try to maximize the strong characteristics of the players to develop Korea’s own football style.

“Teams like Korea have a hard time in dealing with European and African teams that have many robust players, but changing physique isn’t something we can do,” the coach said.

“But Asian players are fast and run more on the field, so I will try to find out how we should play in the future through the friendly matches. The team also certainly needs to improve its ability to score. Korea doesn’t have problems in possessing the ball, but needs to improve the very last plays that actually put a number on the scoreboard.”

The coach said he is looking forward to giving as many players as possible an opportunity to play for the national team and asked footballers in the K-League Classic and in foreign leagues to play harder to earn a spot.