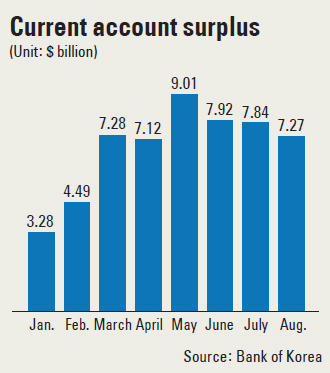 The nation’s current account balance once again posted a surplus last month, continuing the rally for the 30th consecutive month.

Although the surplus streak has lasted two and a half years, it is raising fresh concerns over economic growth as the nature of the surplus has been called into question. Last month it was caused by a sharper decline in imports rather than a boost in exports.

The recent depreciation of the yen against the Korean won and the dollar has further deepened concerns over Korea’s economic growth, particularly its global export competitiveness, which could undermine the economic stimulus campaign including the lower key interest rate.

According to the Bank of Korea yesterday, the nation’s current account balance posted a $7.2 billion surplus in August, a drop from $7.8 billion posted a month earlier.

But the August surplus resulted from imports falling more than exports increased.

However, the central bank downplayed concerns over economic growth.

“We projected that the current account surplus would amount to $84 billion [for the year],” said a BOK official. “When we look at the current momentum, it is going in the direction that we have expected.”

The current account surplus in the first eight months of this year amounts to $54.3 billion, which not only exceeds last year’s eight-month record of $46.4 billion but also outpaces the $50.8 billion accumulated surplus for the entire year of 2012.

The official said last month’s surplus shrank compared to July because of the increased deficit on the service account and the primary income account.

“As it was in the case of last year, overall export performance in the second half was better than in the first half,” the official said.

The surplus report was made two weeks ahead of the central bank’s monthly monetary policy meeting scheduled for Oct. 15. There is growing speculation that the central bank will again adjust the nation’s key borrowing rate to prevent further economic decline.

Saying the Sewol ferry tragedy’s effect on the economy was larger than anticipated, the central bank shaved off 0.25 percentage point from the 2.5 percent key borrowing rate last month. Despite the government’s effort to boost the economy by lowering the interest rate and deregulating, it seems to have been weakened recently by the growing external uncertainties particularly surrounding the depreciating yen.

Some market experts are speculating that the central bank will likely lower its economic growth outlook next month.

“The economic growth until the second quarter was 3.7 percent but for the country to reach its targeted 3.8 percent growth, economic expansion in the second quarter would have to be higher,” said Park June, an analyst at Eugene Investment & Securities. “But considering that the domestic market remained lukewarm in the third quarter, it will not be easy to achieve the central bank’s annual growth target.”