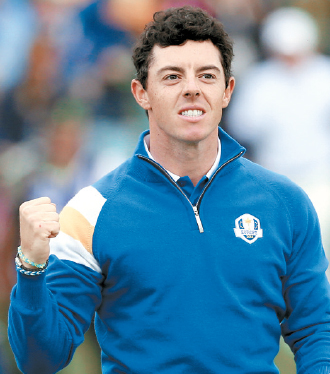 Rory McIlroy showed precisely why he is ranked as the world’s top golfer on Sunday with a dazzling performance in the final-day singles to spearhead Europe’s victory charge in the 40th Ryder Cup.

Playing in the third match of the day, the 25-year-old Northern Irishman showed the full range of his dynamic shot-making skills as he powered to an emphatic 5-and-4 win over close friend Rickie Fowler.

McIlroy wielded a red-hot putter on a sunny day at Gleneagles, notching four birdies and an eagle in the first six holes to leave his American opponent reeling.

There was no stopping the British Open and U.S. PGA champion as he claimed three more birdies before closing out the American on the 14th green.

“I knew I needed to get off to a fast start and I knew what was expected of me as one of the leaders of the team,” McIlroy told reporters.

“I was really up for it today, more than in the final rounds of the majors I won earlier this year.

“It was very satisfying. I knew Paul wanted to play me up the order and I knew what was expected,” he said of Captain Paul McGinley.

“There was no option but to win. I was six-under through six and that built a comfortable lead. This week has been an amazing experience.”

McIlroy was in the room to offer his encouragement when McGinley was announced as Europe’s captain in Abu Dhabi in January 2013 and he heaped praise on the genial Irishman after Sunday’s triumph.

“I can’t say enough about our captain,” said the four-times major winner. “Paul has been absolutely immense this week.

“He has left no stone unturned. He’s just been fantastic. Everything he’s done sort of tied in, from speeches he’s made to the people he got in to talk to us, the imagery in our team room - everything.

“He’s given this week a lot of thought over the past two years. I’m just so glad that it worked out for him.”

McIlroy, one of two ever-presents for Europe this week along with top points scorer Justin Rose, left his best golf for Saturday and Sunday.

“I am very proud,” he said. “I feel like I definitely played my best golf yesterday and today.

“I came out today and played the best golf I played all week. Personally, for me it puts the icing on the cake of what’s been a fantastic summer, and obviously I’m looking forward to more Ryder Cups and more great weeks with these guys.”

McIlroy was delighted that Welsh rookie Jamie Donaldson secured the winning point when he defeated Keegan Bradley 4 and 3 thanks to a pinpoint wedged approach to the 15th green.

“That was incredible,” said the world number one. “We were all standing at the side of the green and watching the ball in the air and we were thinking, ‘this is looking really good’ and it lands right beside the hole and stops dead.

“I’m really happy for JD to get the job done because he’s been fantastic all week and he’s really taken to this Ryder Cup really well. He’s been great in the team room and he’s a lot of fun.” Reuters