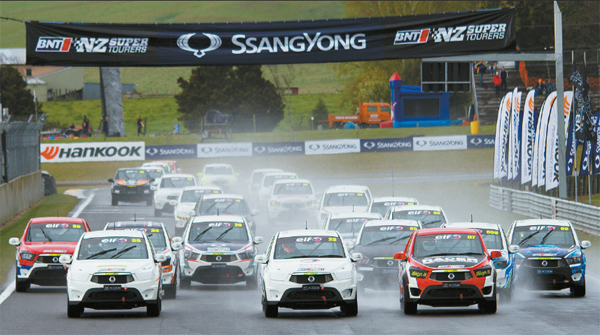 In the one-make race, drivers at Taupo Motorsport Park got behind the wheel of 25 Actyon Sports SUVs with the same racing specifications, which were kept to a minimum in order to show off the performance quality of the original Actyon Sports.

The SAR is part of New Zealand’s biggest motorsport event, BNT New Zealand SuperTourers, which will have seven rounds in the 2014-15 season. More than 12,000 people were at the race track to watch the dozens of races held during the two-day event.

Last weekend’s event was the first round of the season. The SAR consists of seven rounds each with three races. Drivers receive points based on their performance and the winner will be determined based on total points at the end of the season.

The winner will be presented with the Sir Colin Meads Cup, named after a New Zealand rugby legend who is also currently the honorary ambassador to the Ssangyong New Zealand dealership.

Gene Rollinson of New Zealand came in first in the initial race, which was intense enough to wreck some of the vehicles.

“The powerful performances and stable ride of the Actyon Sports were very impressive,” Rollinson said in an interview after the final race of the weekend. “I’ll do my best also in the remaining rounds using the strengths of the vehicle.”

“The handling and the power of the Actyon Sports really brings 110 percent out of you in the car,” said Faine Kahia, a student at Taupo Nui-a-Tia College who is the driver for Ssangyong New Zealand’s factory and who came in fourth. “It isn’t the fastest thing in the world, but it handles really well, and it shows the true talent of the driver.”

Ssangyong Motor will sponsor the SAR in New Zealand for the next three years. Given that the BNT New Zealand SuperTourers is well known locally and is broadcast on television, the Korean SUV maker expects the event will catch the attention of the country’s younger generation looking for a high-performance vehicle.

“The TV races have over 100,000 unique people watching every Sunday and we get to have an hour of people engaged in the Ssangyong brand with the program,” said Deon Cooper, managing director of the Ssangyong New Zealand dealership.

Such efforts would be very effective given that motorsports is very popular among local residents.

“Rugby is the most popular sports in New Zealand, but motorsports are as popular as rugby,” said one audience member at the race. “There are many motorsport parks in the country and a lot of people gather for the events.”

Ssangyong hopes the investment will expand its market share in New Zealand.

“Ever since we began exporting to New Zealand in 2010, we have so far achieved continuous growth of 60 percent on annual average,” said Ssangyong CEO Lee Yoo-il in a statement yesterday. “We will continue to reflect the characteristics and consumer needs of New Zealand’s market to build a more dynamic brand image, and we will also carry out marketing activities to escalate Ssangyong’s recognition as a specialized SUV manufacturer.”

The next round will be held Nov. 1 to 2 at the Hampton Downs Motorsport Park located in Waikato, north of Taupo.