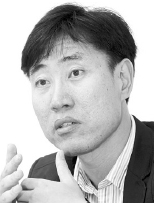 Rep. Ha Tae-keung of the ruling Saenuri Party caused a stir yesterday after urging the group representing families of the fatalities in the Sewol ferry accident to disband itself, disparaging them as left-wingers.

In an opening address at a meeting of first- and second-term lawmakers who gathered to discuss reform measures for the conservative party at the National Assembly, the first-term lawmaker said the Sewol Family Countermeasure Committee should be dissolved, leaving only contact points and a spokesperson for the relatives. Breaking down the committee and removing it from discussions on a special law to investigate the tragedy would be “the best choice for both the general public and the bereaved families,” he said.

“Practically speaking, the committee has largely been perceived as leftist and it has brought this on itself,” Ha said. “That is why no matter what the committee says, it has fallen into the left-right debate, depriving it of the power to appeal to the nation.”

He continued: “A recent chain of incidents - ranging from rough words from Kim Young-oh [the father of one of the student victims], some members of the committee assaulting a driver-for-hire, to the committee spokesman Yoo Gyeong-geun’s distortion of facts - has divested the bereaved families of the nationwide sympathy for them.”

Kim also said Rep. Ha might be taking an extreme stance to survive in the conservative party, since he has been stigmatized as a former leftist renegade.

“We hope Rep. Ha does not trample on the feelings of bereaved families who simply ask [politicians] to reveal the truth,” said Kim.

A graduate of physics from Seoul National University, 45-year-old Rep. Ha engaged in democratization activism in the 1980s.

After reversing his political ideology, he ran Open Radio for North Korea, a Seoul-based North Korea monitoring group, for seven years until being elected as a conservative Saenuri representative in 2012.