Expats given feeling for Korea via Taekwondo

Expats given feeling for Korea via Taekwondo 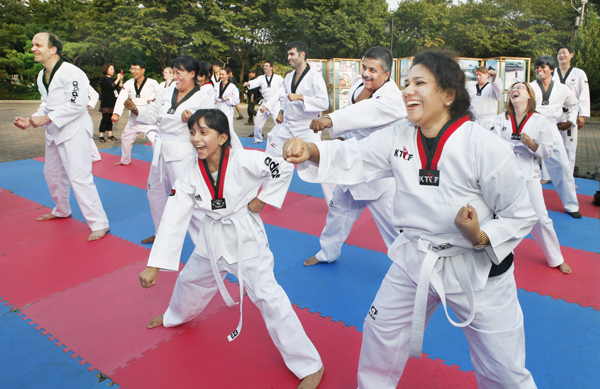 On the way up to Namsangol Hanok Village on the northern foot of Mount Namsan in Seoul, about 30 foreign business people, diplomatic officials and their families gathered to experience taekwondo, the Korean martial art, on Saturday afternoon.

Mats spread on the ground started to fill with participants from diverse countries, ages and genders.

The event was part of the “Get to Know Korea” campaign held by the Korea Trade-Investment Promotion Agency (Kotra) to provide cultural experiences, together with the Seoul Metropolitan Government and Kukkiwon, the world taekwondo headquarters.

Chung Gwang-young, director general for the investment planning development of Kotra, came up with the idea for the event. He believes that memorable cultural experiences and foreign investment go hand in hand.

“By sweating, taekwondo is one of the best ways to break barriers between countries and become friendly with one another,” said Park Cheol-woong, a master from Kukkiwon who led the taekwondo practice.

“It was good exercise and I had a lot of sweating,” said Anthony Snellen, agricultural counselor at the embassy of the Kingdom of the Netherlands. “It was difficult for me to follow the next move.”

Katharina Wagner is a German expat who works for Merck in Korea. Having arrived in Korea in July, it was her first time to learn taekwondo, she said.

“Koreans have gone through a tragedy now,” she said. “But they have to come out of it and celebrate the taekwondo spirit because so much is going well for Korea. It is a beautiful country, a lot of culture, very rich heritage.”

“I hope foreigners spread the news about the good experiences they had in Korea when they go back to their home countries,” said Kim Myong-soo, director of investment public relations at Kotra. “That kind of word of mouth will draw more foreign investors to Korea.”