Although some young musicians find it difficult to digest and interpret the music of Johann Sebastian Bach, Korean-German cellist Isang Enders, 26, says there’s no other music he feels closer to than that of the great German composer from the Baroque period.

“I’ve had Bach in my ear since I was born,” said Enders. “This music was probably around me even before I was born as my parents both worked in a church as a musician and organist.”

That is why the young musician decided to record Bach’s full Cello Suites - an unusual project for a cellist in his age group - for his second album.

Although Enders was born in Germany and has been around music all his life, he also said that Bach’s compositions are the most difficult for him to play. 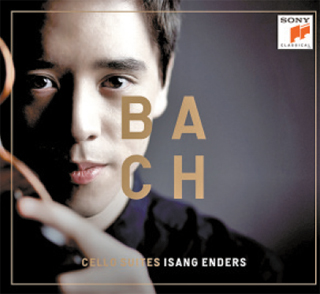 To hear more about Enders’s new album and his concerts in Korea, in Seoul, Gwangju and Daegu among other venues, several local media outlets, including the Korea JoongAng Daily, sat down for an interview with him.

Q. You decided to record Bach’s Cello Suites for your second album. What’s the reason behind this?

A. After I left my former position in Dresden, I had to figure out how I could find myself, and Bach is a sort of very good therapy. It’s like a process that heals you, which helps you to find yourself, because you are always alone. There are no partners. It’s just you and the cello, so you are alone in your room. It’s like being a monk. In this case, you can discover many things about yourself. Whenever you have to experience being alone for many weeks, you realize how hard it is because you discover the good and bad sides of yourself.

How do you interpret Bach’s music?

I think that Bach’s music is very communicative - it’s speaking, singing and dancing. It’s very human-like. I think the most natural way is the best way. Of course, you can always think about what would be the perfect or historically correct way to play Bach, but it’s only honest when it comes from yourself. It’s the same story I tell every other cellist. The music is the same, but I have my language and my own voice. With your own voice, it always sounds different, even when it’s the same story.

Bach is seen as a very spiritual musician. Do you think that’s one of the reasons why young musicians find it difficult to digest and interpret his music?

It’s difficult to say that Bach is only spiritual. Of course, he was a musician who believed [in religion]. But first, he was a musician. It’s the same with him and Shostakovich, for example, in that the background or the life of this person is like a category and every music has to fit into it. So we think Bach was very spiritual, and regard all of his music as spiritual, which is not the case. So Bach is, as I said, first a musician and then a believer. That’s why I recorded [the album] in a studio, not in a church. All other recordings are usually made in a church for the Cello Suites because of the sound and the mood. But I wanted [listeners to] feel the music, like having it in your own room at home because this is out of the spiritual context.

Is it true that there’s a contemporary side to Bach’s music?

Bach’s music is timeless. Although it’s 300 years old, it’s still touching and it doesn’t matter if you put it on with electronic music in a techno club or on the street or in an elevator or in a concert hall. It always touches people. You can’t just ignore it; you have to listen. That’s because of its rhythm, of the structure, of the feelings, of the naturality of this music. It’s very human-like. No generation can avoid this music.

You mentioned earlier that when you are alone in your room with the cello you discover more about yourself, both the good and bad.

Yes. The first thing you realize is failure. So you try to manage or get through this challenge, and then you realize it’s much harder than you think. Then comes the motivation. After failing, the only way is up. In this motivational period you think you can manage it, that you can find a way to make it. Then comes the courage to find your own voice - to be courageous enough to make a point with your own voice. And then comes the view that the music is much bigger than yourself. Then you are on the right path.

How would you define your voice?

I mean, the voice is something related to sound. The voice is the language we talk, not the speaking language, but the musical language. There are so many recordings of Bach’s music. We are used to having so many special sounds of this music already. In that case, you can only try to either find your own way or try to match all others. So either it can be totally right or totally wrong. It can’t be both sides. On the other hand, it’s also the question ‘why now?’ because nobody in my generation has tried to record all the suites of Bach. I think it’s always too early and it’s always too late. So if I don’t do it now, I know in 10 years I will play it differently for sure.

How satisfied were you with the results of the record? Did you want to redo some parts or experiment in a different way?

Oh, every day I think I have to do it again. In the beginning, I recorded it twice. I already recorded one CD and edited everything. But after the post-edit, the final edit, I put it in the trash and went to the studio again. But that’s also what you have to realize: to play this music, it’s always a process. It’ll never end probably until I die. Even the day before I die, I will play it differently than the day before. The recording itself is just a picture of a moment in this way. It was just a moment when the microphone was on for few hours.

What are your plans after the concerts in Korea?

I’m working on a project, which is called “Elements.” It’s for seven different pieces for cello and electronic [instruments], which should be performed with dancers, choreographed and made of a combination of several arts like dancing, movie, staging and performing. I like this conclusion of art.

Why did you start the project?

Because I think there’s no tradition without innovation. Actually we are in the most modern time today, but no other generation before was more old-fashioned than ours. We always look back at something that was nicer in the past and don’t think about what we can make nicer for the future in terms of art. To develop art for the future, we have to think like Bach did, or like Beethoven did, and always develop the current state of art. Then we can guarantee that in 100 years and 200 years they are still playing Beethoven and Bach and the music of today, because in 100 years, the music of today will be very old.