A nod to country music in Virginia

A nod to country music in Virginia 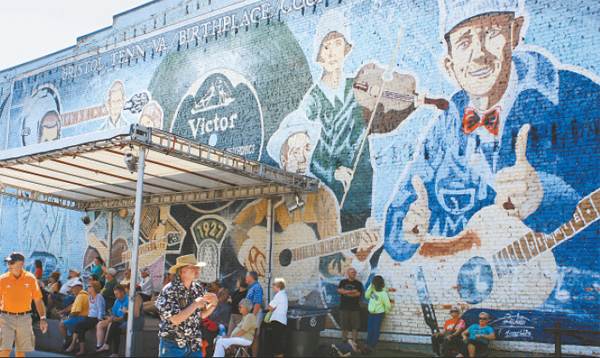 The new Country Music Museum aims to tell the story of the Bristol Sessions, which a mural in the photo above is depicting from the 1927 event, considered to be a milestone in the early days of country music. [AP/NEWSIS]

BRISTOL, Virginia - The sounds of some of the earliest country music recordings are filling a new museum.

But the Birthplace of Country Music Museum is not located in Nashville. Instead, it’s in Bristol, a small town on the Tennessee-Virginia state line. The museum aims to tell the story of the Bristol Sessions, a series of historic recording sessions that took place in 1927 and helped spread what was then known as “hillbilly music’’ to the rest of the country.

The Bristol Sessions started after the Victor Talking Machine Company invented a device capable of recording music for the masses. Victor producer Ralph Peel set up a makeshift studio in the Taylor-Christian Hat Company warehouse on State Street, recording 76 songs in 10 days. Newspaper ads drew singers and musicians from around the Appalachian region, coming by train, horse-and-buggy and on foot. Performers included the Carter Family, known as the first family of country music.

The artists brought a mix of musical styles, including gospel and the blues.

“It was like all these tributaries coming together into a big well of American music,’’ Emmylou Harris says in a film shown in one of the museum’s theaters.

Trisha Gene Brady of The Black Lillies is one of several artists who perform “Will The Circle Be Unbroken’’ in the museum’s immersion theater exhibit, which also features Dolly Parton, Willie Nelson and others. Brady visited the museum in September and says she got emotional when she saw it: “Of course I cried a little bit, there were tears there.’’

Exhibits display instruments, recording equipment, clothing and other artifacts from country music and other genres, such as gospel and blues. Visitors can hear early gospel records inside a small chapel or step inside a sound-proof booth to record their own songs.

What took place in Bristol was not the first time country music was ever recorded, but “it was the first time it was ever mass produced and pushed out to markets like New York and Atlanta and Chicago,’’ said Leah Ross, executive director of the Birthplace of Country Music Museum.

The museum is 290 miles east of downtown Nashville, where a radio station began broadcasting a show in 1925 called the WSM Barn Dance in a downtown office building. The show was later renamed the Grand Ole Opry; it moved to the Ryman Auditorium in 1943 and later to the Grand Ole Opry House. The buildings are among Nashville’s top tourist attractions.

Ross says Bristol’s potential visitors include those who’ve already been to better-known music heritage sites in places like Memphis and Nashville, where the Opry and Country Music Hall of Fame are among the South’s most-visited attractions. She sees the attractions as promoting each other, with visitors making stops at multiple sites.

“Especially the international travelers - they’ve been to the big cities like New York and San Francisco and now they’re ready to really delve down into America and get to what it’s all about,’’ Ross said.

Japan is one of the many places outside the United States where country music is popular. Ross noted that a Japanese magazine called MoonShiner is devoted to country and bluegrass news.

A documentary is also in the works from Oklahoma film director James Payne about country music’s popularity in Japan. AP