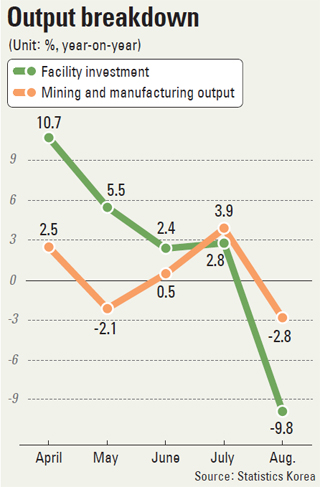 The real economy seems to be slipping back into a slowdown, with industrial activity retreating in August in several areas.

According to a report by Statistics Korea yesterday, the country’s total industrial output fell 0.6 percent in August compared to the previous month, posting a negative figure for the first time since May.

A 3.8 percent drop in mining and manufacturing production led the overall decline, the report showed. It was the largest drop since December 2008, when output plunged by more than 10 percent in the wake of the global financial crisis.

The main reason for the decrease was fewer working days - five short of the number in July - due to summer vacations, the report said.

Both domestic and overseas shipment of goods dropped.

On the other hand, services production rose 0.3 percent in August from a month earlier. Production by wholesalers and retailers, educational businesses, and health care and social welfare providers showed noticeable growth.

Private consumption slightly improved, as the statistics agency’s retail sales index jumped 2.7 percent in August from July. The increase was the highest since March 2011, the report said.

However, as feared by the government, business facility investment showed a significant decline in August.

Due to sluggish business investment, Finance Minister Choi Kyung-hwan has been emphasizing that the economy is in a serious state and needs businesses to spend.

The minister even hinted that the government might release jailed owners of conglomerates to spur investment if the current economic downturn continues. Earlier, Justice Minister Hwang Kyo-ahn said businesspeople who meet the requirements should be subject to parole.

The Ministry of Strategy and Finance blames seasonal factors for the sluggish economic performance, saying the substantial growth of retail sales indicated momentum for recovery.

Because economic indicators have not shown improvement, experts question the effectiveness of so-called Choinomics, Choi’s ambitious plan to boost the economy.

“Choinomics measures such as the short-term expansion of fiscal measures may help increase the assets of a few of the top earners,” said Huh Jae-hwan, an economist at KDB Daewoo Securities. “However, since the economy has many structural problems, it may be hard to have the effect trickle down to the working class.”

Finance Minister Choi yesterday met with 40 businesspeople to encourage them to invest.

“Although internal and external economic conditions are not so favorable, I ask the business community to make bold investments for the future of our economy,” Choi said at the meeting held in central Seoul. “Now is the ‘golden time’ when the fate of our economy will be determined.”