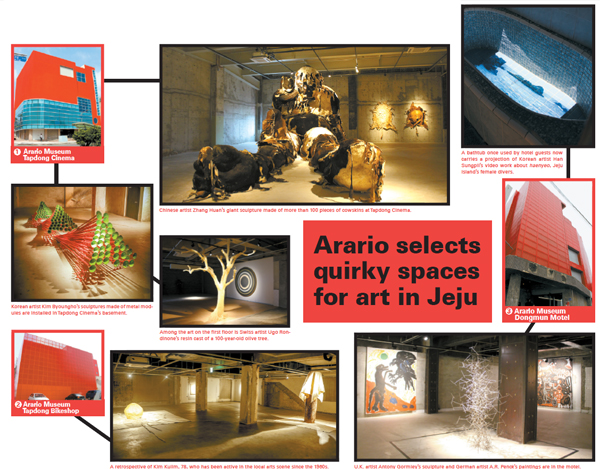 JEJU - Three bright red buildings have sprung up on the streets of Jeju City’s Old Town on the northern coast of the southern Korean island.

Inside the premises, which opened to the public yesterday, are works by hot contemporary artists such as China’s Zhang Huan and Britain’s Antony Gormley.

The exhibits are part of a collection by Ci Kim, chairman of Arario Group and one of the most influential art collectors in Korea.

In accordance with the names, which suggest Arario’s intention to preserve the history of the establishments, the buildings retain traces of the past, such as Tapdong Cinema’s circular windows, Tapdong Bikeshop’s old wall mirrors and Dongmun Motel’s small bedrooms and toilets.

On its second floor is Indian artist Subodh Gupta’s giant installation - a 21-meter (68.9-foot) traditionally made boat made carrying various everyday goods used by Indians, which hangs askew. Another huge-scale work, Zhang’s sculpture of a sitting man made of more than 100 pieces of cowskin, is on the fourth floor. The old surroundings of these pieces - the cement walls and ceilings with exposed beams - give them the weight of accumulated time and a sense of dignity.

While Tapdong Cinema is a long-term exhibition of pieces from Kim’s collection, the adjacent Tapdong Bikeshop is for relatively short-term special shows. The first of these is a retrospective of Kim Kulim. The artist, 78, was unprecedentedly experimental in Korea with his performances and installations in the 1960s and ’70s. He is still active in the arts scene.

Small guest rooms on the motel’s top floor are filled with Korean artist Han Sungpil’s photo series on Jeju’s unique water tanks. A bathtub in the attached restroom shows a projection of his video work about haenyeo, or traditional female divers, which the island is famous for.

A total of 72 pieces by 21 artists from 10 countries occupy Tapdong Cinema. In Dongmun motel there are 63 works by 16 artists from seven countries.

These are just a small part of Ci Kim’s collection, which reaches around 3,800 pieces. He is the only Korean to make the annual list of the world’s top 200 collectors by New York-based art magazine ARTnews this year, for the seventh time.

“There are some reasons why I remodeled old buildings into the museums instead of commissioning an architect to design new buildings for the museums,” Ci Kim said in a press preview last week. “I have seen visitors to museums designed by renowned architects pay more attention to the architecture than to the art works exhibited in them, which I never want ... And art works against exposed cement walls and between certain concrete pillars could stand out better than when they are in typical white cubes of museums.”

Kim also said in an interview with the Korea JoongAng Daily in February that: “It would be more meaningful if I approached it in a creative way, such as transforming long-derelict spaces into museums.”

Jeju City’s Old Town, near Jeju Port, has seen sluggish business over the decade since New Town, five to six kilometers southwest, emerged. Tapdong Cinema building had been abandoned for a decade.

“Tapdong streets are the place of nostalgia for my childhood but they were damaged while declining. I am happy with the museums as I expect them to help revive the streets,” wrote a blogger with the pen name Vamos de Fiesta.

“What is the most important for the future of Korean artists is to provide them with good spaces for good exhibitions,” Kim said. “And that’s what local art collectors should do. That’s not the thing to leave to the government. ...?The number of private art museums is so small in Korea.”

Kim’s ambitious Jeju museum project has not yet wrapped up. “I will open at least nine museums in total on Jeju island in five to six years,” he said.

Admission to Tapdong Cinema is 12,000 won ($11.27) for adults. The ticket covers admission to the adjacent Tapdong Bikeshop. Admission to Dongmun Motel is 6,000 won for adults. Residents in Jeju island get a 50 percent discount. Children of 7 and under are not allowed. All three museums are open from 11 a.m. to 8 p.m. every day. For details, visit www.arariomuseum.org or call (064) 720-8201 for Tapdong Cinema, 8204 for Tapdong Bikeshop and 8202 for Dongmun Motel.