Will wearable devices be an IT industry game changer?

“I skate to where the puck is going to be, not where it has been,” Apple’s Steve Jobs used to say, quoting former Canadian ice hockey player Wayne Gretzky.

He also used it as his closing remark at the unveiling of the first iPhone in 2007, predicting the evolution of a mobile phone with calling, SMS and a camera into a smartphone. 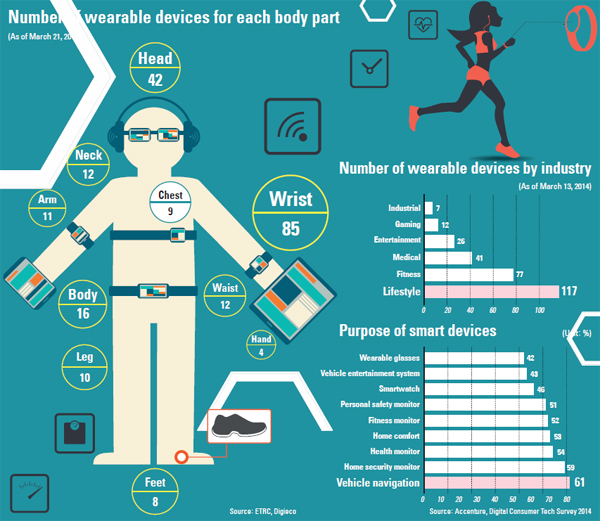 The device has spread faster than any other gadget in history. By comparison, the television market took 100 years to grow to a value of 110 trillion won.

However, the growth pace of smartphones has passed its peak. According to U.S. market research firm Strategy Analytics, the global smartphone market grew 10-fold in seven years from 119.7 million units shipped in 2007 to 1.2 billion units in 2013, but the rate is now declining.

The researcher predicts that 1.65 billion units will be shipped in 2020, with a growth rate of 37.8 percent for the next six years.

The market has also become saturated with companies like China’s Xiaomi, Huawei and Lenovo all offering competitive prices compared to higher-end devices of Apple, Samsung and Sony.

While Samsung Galaxy phones retail for about 900,000 won in Korea, Xiaomi, which is expected to enter the Korean market, will cost about 300,000 won.

And latecomers from Taiwan and India are launching new phones at even lower prices.

But ABI Research predicted that the wearable device market will show steady growth to post 485 million units shipped in 2018 and account for 28 percent of the smart device market.

For IT companies such as Samsung Electronics, Apple and LG Electronics, the wearable market will be the next battlefield, market researchers say.

How will wearable devices evolve?

As people, things and spaces are being connected via the Internet, known as the Internet of Things (IoT), the role of wearable devices is expanding.

The IT industry expects that eventually, the virtual world will also be converged with people, things and spaces in what is called the Intelligent Internet of Everything.

In the future, wearable gadgets will not only be portable and attachable but also edible or implanted in human bodies, according to the KT economic research institute Digieco.

Unlike glasses, watches and wristbands with similar functions to a smartphone, attachable devices can be applied to the skin like a patch and are expected to be commercialized in five years, according to a report by Digieco.

Edible devices, the ultimate stage of wearables, can be consumed or implanted in human bodies and are then connected to a device. For example, Google is testing a smart contact lens with pharmaceutical giant Novartis to help patients manage diabetes.

At IFA 2014, most wearable devices showed a combination of health care functions.

They did not just record exercise like a pedometer would, but also had personalized features such as diagnosing the amount of exercise necessary to lose weight and monitoring the wearer’s heart rate to make sure the body would not tire or suffer damage.

When the wearer of Sony’s SmartWatch 3 takes a selfie, the device gives information on skin conditions, such as the degree of moisture and oiliness, and offers skin-care advice.

“As wearable devices are in their early stages of development and are gadgets that come in contact with the body, ideas are concentrated on health care,” said Kim In-sung, a computer science professor at Hanyang University. “Their growth is in the hands of features that will control the habits of consumers in the future and depends on which services they will merge with, as they can be applied to various industries such as the fashion, medical and entertainment sectors.”

There is still a long way to go before wearable devices take their position as a steady growth driver in the IT industry rather than just being a fad.

“The complaints about the current wearable devices retailed in the market can be categorized into their short battery life, the network that depends on smartphones and the designs that have no merits to be used as a fashion item,” said Shim Soo-min, a researcher at Digieco.

Smartwatches have one-tenth of a smartphone’s battery capacity at 315mAh, so they can’t be left on and their role is limited to being secondary to smartphones or other connected gadgets.

Due to limited battery, they use low-power short-range Bluetooth networks. While the average power consumption of Wi-Fi on standby is 120mW, 3G is 800mW and LTE is 1080 mW, Bluetooth 4.0 consumes 1.4 to 2mW on standby.

The latest Samsung Gear S, the sixth in the series, can make and receive calls with a built-in USIM chip and uses Wi-Fi or 3G to check messages and calls without a smartphone. But the battery capacity is still far too low for making calls or checking messages regularly.

According to the Korea Advanced Institute of Science and Technology, flexible battery technology for wearable devices is expected to take another year or two to be fully developed.

But wearable devices must be fashionable and functional - and so far the public has not embraced the designs of wearable devices. Their size and weight add to the dissatisfaction, and many customers have complained that the camera and speaker on the strap get in the way of touching the screen and keyboard.

“Most of the screen sizes range between 1.5 inches and 2.0 inches, but the contents that can be displayed at these small size screens are limited,” said Choi Se-wan, a mobile app developer.

Nevertheless, experts’ views and reports on the future of wearable devices are optimistic.

Market research firm Canalys predicted that after the launch of the Apple Watch, smartwatch shipments will grow threefold in 2015 to 28.2 million units, compared to this year.

“By creating a new user interface tailored to its tiny display, Apple has produced a smartwatch that mass-market consumers will actually want to wear,” said Daniel Matte, an analyst at Canalys. “The sleek software, variety of designs and reasonable entry price make for a compelling new product.”

Another research director at Gartner, Angela McIntyre, said that the Apple Watch will trigger more consumer interest once it starts shipping in 2015.

“Apple introduced three smartwatch models that will sell at a wide price range, with the lowest starting at $349. As with the iPhone, Apple’s high-price strategy for the watch will limit its market share, yet, with its attention to design and the user interface, we believe this product will attract many users.”

Gartner has also said that even though Sony and Samsung’s wearable products have not received much enthusiasm, there have been some positive developments this year in terms of design and user experience, so it expects consumers will show more interest in these products in the second half.

China’s impact on the market

A growing number of Chinese companies have also launched fitness wristbands, putting pressure on established players such as Fitbit and Jawbone.

According to Gartner, in addition to established vendors, original design manufacturers and semiconductor vendors in China are ready to take on the next generation of consumers.

Although these manufacturers are currently focused on the local market, they will eventually look to expand internationally.

“Products and offerings among Chinese vendors are similar to those of other vendors with a variety of form factors, operating systems, connectivity and sensor options,” McIntyre said.

“International expansion will start to accelerate in 2015, and in this context we expect several Chinese vendors to build on Android Wear … to create more appeal. Certainly, they are faced with the same hurdles regarding design as all international vendors, but we also expect them to leverage one thing that has been to their constant advantage in the smartphone and tablet market: the cost advantage of the Chinese supply chain ecosystem.

“Chinese vendors might be able to bring Android Wear-based smartwatches to a very affordable price point below $150 with decent designs and sensors, driving mass-market adoption in mature markets.”

Xiaomi’s smartband Mi, which has health care functions, sells for $13. Huawei launched its smartband TalkBand in March, which tracks exercise and sleeping hours like other smartbands. It costs about 140,000 won. ZTE’s smartband Grand Band costs 130,000 won.

At the Wearable Device Tech Vision Seminar 2014 on Friday, Digieco analyst Shim Soo-min said wearable devices independently running on Android and Tizen operating systems will enter a new stage of competition that is separate from existing products relying on smartphones.

Experts at the event held at the Seoul Trade Exhibition and Convention in Daechi-dong, southern Seoul, agreed that the spread of the Internet of Things will accelerate the growth of wearable devices.

Google has started linking its Smartwatch OS Android Wear with its temperature-control device Nest, and Apple is expanding to include wearable devices on its HomeKit and HealthKit platforms.

“While the smartphones converged different functions such as cameras and MP3 players into one, wearable devices will disperse them to each body part,” said Kim Gun-nyeon, a division head at the Korea Electronics Technology Institute.