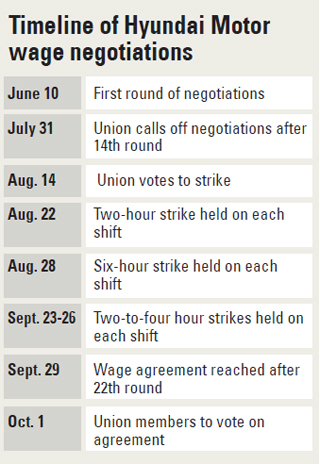 Hyundai Motor, the nation’s largest automaker, has reached a tentative agreement with its labor union on wages and base pay after 22 rounds of negotiations and six temporary strikes.

Some 40,000 union members will vote today on the agreement reached late Monday. If more than half approve, the agreement will be implemented.

“The workers’ change of view that Hyundai’s local plant should step up as a global hub and become a sustainable company has led to this tentative agreement,” Hyundai said in a press release.

Hyundai claimed that more than 40,000 vehicles weren’t produced on schedule due to the union’s six partial strikes this year.

The two sides were in a tug-of-war over whether regular bonuses should be calculated as part of base pay, which is used to calculate other benefits like overtime and retirement pay.

The Supreme Court last year ruled that all bonuses that are uniform and regularly paid should be considered part of base pay.

GM Korea and Ssangyong Motor succesfully concluded their wage negotiations by including regularly paid bonuses as base pay.

Hyundai has said it would wait for a court ruling in its own case and that its bonuses are not regularly paid because workers have to meet certain conditions - working 15 days in two months - to receive the bonuses.

On this issue, management and the union decided to set up a special committee to discuss the pay system and base pay reform. The committee’s recommendation is expected in March.

“The management and union will both step up to improve the complex payment system in the company that is the root of the base pay issue,” Hyundai said in a statement. “We think that the base pay issue is not a problem for Hyundai alone, but all Korean industry, so we will approach it in a widened context.”

The agreement raises basic monthly salaries by 98,000 won ($93) and gives workers 300 percent of base salary as a bonus and a lump sum of 5 million won. Employees also will be given 3.7 million won if they meet production goals, as well as 200,000 won in traditional market gift certificates.

Hyundai said the wage and bonus increases are smaller than last year because the company’s earnings declined.

“It’s meaningful because the two sides have found common ground in which one-time bonus payments should be related to the company’s performance and business environment,” Hyundai said in a release.

On the retirement age, the two sides agreed employees can maintain full employment status until age 60. Previously, they could work until 59 and extend their work for another year as part-timers.

Hyundai rejected a proposal from the union that fired union members be reinstated.

Renault Samsung Motors yesterday officially signed a wage deal for this year after its management and union reached tentative agreement on Sept. 19.