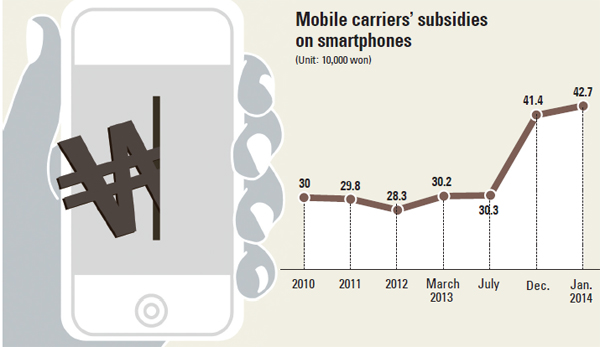 The Mobile Device Distribution Improvement Act also benefits customers in three more ways: It gives the public access to price information from the three mobile carriers, relieves pressure when customers choose a plan and gives fair discounts even if a customer doesn’t buy a new phone. 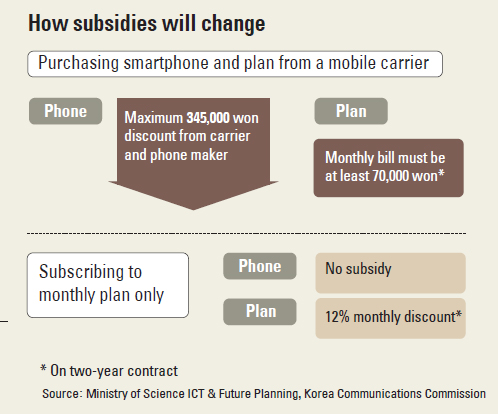 “The main focus of the change revolves around evenly dividing subsidy benefits to all mobile phone users and we hope to see the number of beneficiaries increase.”

But the act does not give consumers as much transparency as an earlier version, after the government decided last week not to require public postings of the initial factory price of each device.

The act also ensures that consumers have access to up-to-date subsidy information for each phone, including the subsidy depending on the model and the price at each retailer. Shoppers can check the prices on each carrier’s website and at shops.

However, the act allows the carriers to change the subsidies on each phone once a week and each seller can give an extra subsidy of up to 15 percent out of their own pockets off the amount publicized by each carrier.

The act also aims to relieve the pressure on customers to subscribe to a costly monthly plan to receive subsidies. Instead, subsidies are given in proportion to the price of the plan.

Before, sales agents persuaded customers to go for expensive plans, saying that they could switch to a cheaper plan after three months, leading people to spend excessively on their phone bills.

Part of the problem was that the earlier mobile act allowed the mobile carriers to allocate most of their subsidy budget to monthly plans of between 60,000 won and 100,000 won.

Consumers who bring in their current phone or an old phone can get a 12 percent discount toward their monthly phone bill.

After the amended act takes effect, the government hopes the three mobile carriers will prioritize keeping their existing customers with quality service and new benefits rather than engaging in subsidy battles.

The nation’s largest mobile carrier, SK Telecom, said last week it will launch a program that live-tracks a subscriber’s data usage patterns, such as the time and place where they most use the service. That information can then be used to pick the data plan best suited to the customer’s habits.