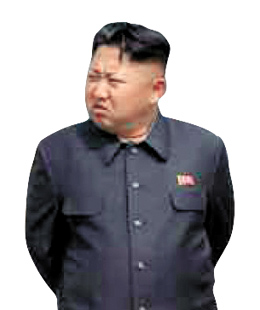 North Korea admitted last week that its third-generation leader Kim Jong-un was suffering from an illness, in a rare and apparent attempt to stop speculation surrounding his condition.

However, the rumors about Kim spread fast in the international community, with some even mentioning the possibility of a military coup.

After the 31-year-old missed the Supreme People’s Assembly meeting on Thursday, the North’s TV network reported that he was in an “uncomfortable physical condition,” but did not elaborate on his illness. The state-run Central TV had previously aired footage of Kim limping during a site inspection in July. He made his last public appearance on Sept. 3, when he attended a concert with his wife.

Intelligence sources in South Korea and the United States found that orthopedic surgeons from China and Russia had surreptitiously visited the country and inferred that the North’s supreme leader was experiencing joint problems.

Officials in Seoul said Kim has medical issues with his legs, though it does not appear to be serious enough to cause a power vacuum in the North.

Over the weekend, rumors circulated in the diplomatic community in Beijing that key military officials in the North had staged a military coup and attempted to assassinate Kim. The apparent report identified Jo Myong-rok, the former director of the North Korean Army’s General Political Bureau, as the force behind the rebellion, though the story quickly lost credibility - the senior military official died in November 2010.

The story evolved quickly after that, pointing to Hwang Pyong-so, who was recently appointed to that post, as the force behind the coup, but it also failed to sway the public.

Other rumors about Kim’s medical condition spread this week, too, among Seoul stock market insiders as well as in cyberspace. Some cited Iranian media as a source, claiming that Kim had a blood clot in his brain. Such sensational reports are not uncommon and largely due to the regime’s reclusive nature. Kim’s absence from the public eye often prompts a slew of misinformation, starting an intelligence war.

In addition to informants in the North and cooperation with intelligence agencies in other countries, internal eavesdropping and international communication from the North Korean leader’s office, as well as hospital and satellite image analysis, are also key factors in gathering information.

When Kim Jong-il, the late father of Jong-un, fell ill in August 2008, speculation grew that he was already dead. A key South Korean official later said that “Kim is just capable of brushing his teeth on his own,” a comment that nearly gave away his source.

The North Korean leader attended a football match later that year in November, although it was evident that he was having difficulty moving his arms and legs. He appeared to have suffered a stroke, though there were no apparent signs of paralysis. However, intelligence authorities in the South and Western countries sometimes spread misinformation intentionally.

“When we could not determine Kim Jong-il’s whereabouts, we sometimes started a rumor that he had died,” said a former South Korean intelligence official who worked on North Korean affairs. “Pyongyang always made a move then, and we followed those movements to collect more intelligence.”

In May 2003, various reports stated that Gil Jae-kyong, the vice-director of the Secretariat who managed the Kim family’s secret funds, had defected to a Western country, an account that circulated extensively through South Korean media and was eventually sourced back to a Central Intelligence Agency agent tracking Gil’s movements.

The JoongAng Ilbo, put an end to that rumor, however, when it ran an exclusive report verifying that Gil had died three years ago, along with a photo of his grave in Pyongyang.

But the rumor mill works both ways, and sometimes North Korea fabricates stories to study the outside world’s response. In late 1987, for instance, rumors spread that North Korea’ founder, Kim Il Sung, had died.

The North Korean military flew their flags at half-mast at the border, and the National Assembly was briefed about the situation by the chairman of the Joint Chiefs of Staff. Kim Il Sung surprised the world, though, by appearing at the airport in Pyongyang a few days later to receive the visiting Mongolian president.

“When a rumor about illness or an assassination attempt spreads about a North Korean leader, an intelligence war breaks out,” a South Korean official said.

And an intelligence war is a true war, officials contend, despite how it may sound, with real consequences for those involved.

During the Kim Dae-jung administration, a field-grade officer of the Defense Intelligence Command was abducted and taken to the North after his identity was compromised during a covert mission in northeastern China. Known as the CKW case among intelligence veterans - the initials of the official’s name - the agent was only returned to the South after enduring six months of extreme torture and revealing information on Seoul’s intelligence activities in Pyongyang.

Yet South Korean authorities were suspicious about why the North would have spared him and subsequently sent him back, where he faced more interrogation. The probe then revealed that the agent had been given an espionage mission by the North.

In another operation in the late 1990s, agents who succeeded in bringing back soil samples from a suspected North Korean nuclear facility received blank decorations that did not specify their achievements in a covert mission.

“The young Korean-Chinese men who helped them were arrested and executed during the mission,” one Seoul official recalled.

A black marble plaque with 48 stars engraved now stands at the National Intelligence Service in Naegok-dong, southern Seoul. The stars represent the intelligence agents killed during service overseas and operations in North Korea since the agency’s establishment in 1961.