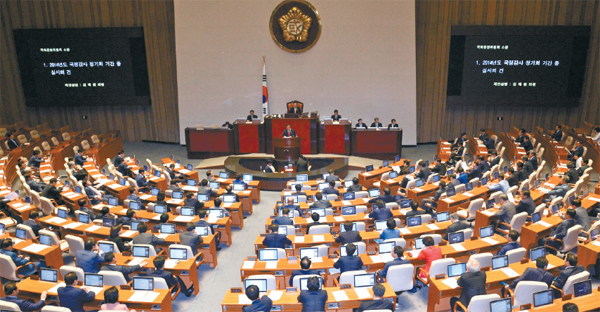 Lawmakers from the ruling Saenuri Party and opposition New Politics Alliance for Democracy attend a plenary session last night after the two parties ironed out an agreement on a special Sewol law. [NEWSIS]

Paralysis at the National Assembly came to an end last night after the ruling Saenuri Party and opposition New Politics Alliance for Democracy(NPAD) came to an agreement on a special law to investigate the sinking of the Sewol - and returned to the legislature to pass laws.

The vote on 90 pending bills ended 150 days of legislative paralysis. No bills were passed by the legislature between May 2 and last night.

“I thank the people for their patience in waiting for the National Assembly to end its deadlock,” said Assembly Speaker Chung Ui-hwa. “And I thank the party leadership for making a grand compromise.”

The return to lawmaking was made possible by an agreement earlier in the day on the broad outline of a special law to investigate the sinking of the Sewol, which killed more than 300 people in April, the cause of the democratic logjam.

Under the agreement, the two parties consented to a manner of forming a seven-member recommendation committee that will pick candidates for a special prosecutor to investigate the cause of the April 16 disaster.

Ultimately, the committee will make recommendations of two candidates. President Park Geun-hye will make the final choice of who will serve as the special prosecutor.

Yesterday, the lawmakers agreed to discuss later whether the recommendation process will involve the relatives of the Sewol victims or not. Earlier, the NPAD had insisted that the Saenuri’s recommendations for the committee had to be confirmed by the victims’ families.

And the relatives shot down two previous agreements on the law between the Saenuri and the NPAD.

The bipartisan deals clinched yesterday also said that all people recommended for the committee should be figures with guaranteed political neutrality.

The lawmakers decided to hold parliamentary audits of government offices from Oct. 7 through 27, delaying the schedule by six days.

They also agreed to pass the special bill on the Sewol investigation, a revised bill on government structure and the so-called Yoo Byung-eun bill - named for the de facto owner of the Sewol - which will regulate and punish people who conceal financial gains made through crimes, by the end of October.

The breakthrough followed a three-way meeting in the morning between the floor leaders of the Saenuri and the NPAD - Rep. Lee Wan-koo and Rep. Park Young-sun - and a representative of the Sewol Family Countermeasure Committee, Jeon Myeong-seon. They also met Monday but didn’t come to an agreement.

For the plenary session scheduled for yesterday at the Assembly to vote on a huge backlog of bills, 154 of the Saenuri’s 158 lawmakers entered the chamber at around 2 p.m. Although they constituted a quorum for the opening of the session, they decided to wait for the opposition lawmakers, who kicked off their general meeting at 2 p.m.

Park Young-sun, the NPAD floor leader, officially asked Assembly Speaker Chung Eui-hwa to postpone the session. Chung grabbed the microphone at the podium at around 2:50 p.m., asking the ruling party members to show some regard for the opposition. “We can’t possibly wait beyond midnight,” he told the lawmakers. “I will open the session after checking out the situation over there [the NPAD] so please don’t go too far away.”