Pororo gets a diplomatic assignment

Pororo gets a diplomatic assignment 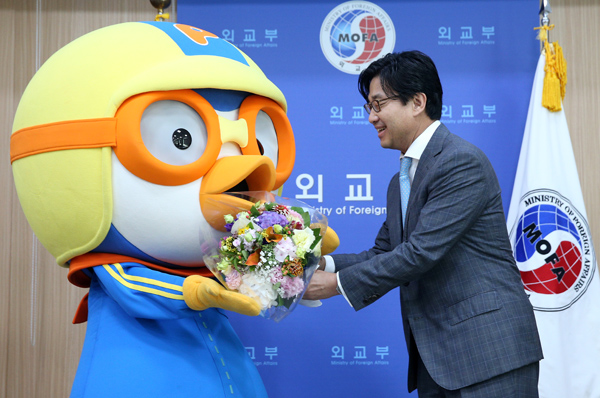 Pororo is appointed ambassador for the Korea-Asean’ summit in Busan by Choi Jong-moon, secretary-general of the summit’s preparatory office. [NEWS1]

The upcoming Korea-Asean special leaders’ summit in Busan has anointed an unlikely promotional ambassador in the form of a little blue animated penguin, Pororo, the country’s most beloved cartoon character.

This year celebrates the 25th anniversary of relations between Seoul and the Association of Southeast Asian Nations (Asean), and the South Korean government invited the leaders of the 10 Asean nations to a two-day commemorative summit which kicks off Dec. 11.

The Ministry of Foreign Affairs yesterday named the star of the beloved Korean animation “Pororo the Little Penguin” as the promotional ambassador for children for the summit.

The ministry said a five-part webtoon series featuring Pororo celebrating the Korean-Asean leaders’ summit would be released in the upcoming months.

At a ceremony held at the ministry in central Seoul to appoint Pororo, Choi Jong-moon, secretary-general of the summit’s preparatory office said, “The Asean countries in the future are our No. 1 market, and we need to secure support in politics and security. Pororo was thus selected as our promotional ambassador for our growing generation to learn about Southeast Asian countries and accept them with friendship.”

The summit, to be held in Bexco, Busan, is the first multilateral summit to be hosted by the Park Geun-hye administration and is expected to attract some 3,500 delegates including government officials, business leaders and the press.

“Pororo the Little Penguin” first aired in 2003 and has since garnered huge popularity among children not only in Korea, but also in Southeast Asian countries, said the ministry.