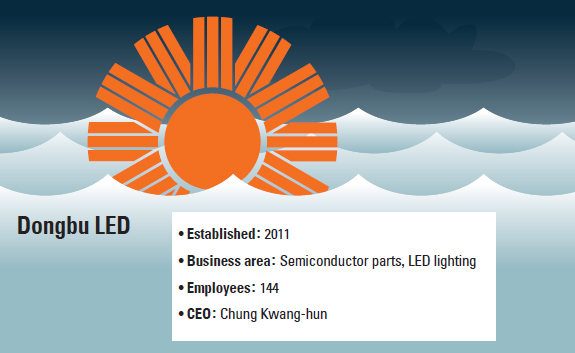 According to Dongbu Group and its main creditor, Korea Development Bank (KDB), Dongbu LED applied for receivership at Suwon District Court on Tuesday because it couldn’t pay its debts.

However, its business has been declining with the rise of cheap Chinese products and an oversupply problem. The company’s revenue has continuously slipped, while operating losses piled up after the acquisition by Dongbu. The company’s total debt with financial institutions amounts to more than 25 billion won. The debt is causing capital erosion of more than 5 billion won. 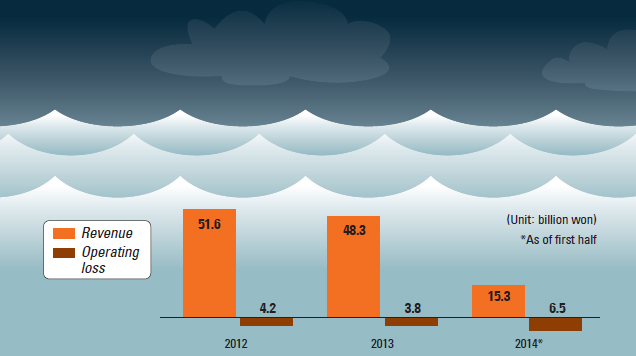 “We asked KDB for a debt workout program, but it was denied,” said a Dongbu Group insider. “The group tried to help the company, but it was difficult as credit ratings of our nonfinancial affiliates have fallen after KDB announced the voluntary agreement of Dongbu Steel in June.”

Dongbu LED is the first company under Dongbu Group to file for court receivership since the conglomerate announced a 3 trillion won debt restructuring plan last November.

Despite Dongbu Group seeing its affiliate filing for court receivership, industry insiders said its impact on the market will not be severe since the debt level of Dongbu LED is small and it doesn’t affect Dongbu Group’s control structure.

“Dongbu LED is not listed on the stock market, so there are no private investors for the company’s bond,” said a group spokesman. “Since the company is small, other affiliates that have Dongbu LED stakes will not lose big money, so there won’t be an additional liquidity crisis for them because of this issue.”

Dongbu Group also emphasized that other affiliates, such as Dongbu Construction, will not follow in the steps of Dongbu LED as they execute their own restructuring plans.

However, there’s still a long road ahead for Dongbu Group and Chairman Kim Jun-ki to escape the liquidity crisis.

What’s especially concerning Kim is that he is on the brink of losing control of core affiliate Dongbu Steel, the nation’s third-largest steelmaker.

KDB and other creditors are set to confirm measures to revive Dongbu Steel today that include 600 billion won in support, extending the debt payment deadline, conducting 53 billion won worth of debt-to-equity swaps and a capital reduction for shareholders.

Main creditor KDB originally was to receive agreement from the other nine major creditors about the normalizing plan by Tuesday, but since only three sent the agreement it decided to wait until today. Once it receives agreement from all nine creditors, it will sign a memorandum of understanding with Dongbu Steel and carry out the plan.

If one of nine creditors opposes the proposed measures, the voluntary agreement between creditors and Dongbu Steel signed in June will be nullified, and the company would have to seek a debt workout program or, in a worst-case scenario, file for court receivership.

However, if the debt-to-equity swap and capital reduction happen, creditors will have a 51 percent stake in Dongbu Steel, meaning that Chairman Kim will lose ownership.

Dongbu Group affiliates and Kim’s family currently account for nearly a 37 percent stake in Dongbu Steel, but after the capital reduction their ownership at the steelmaker would fall below 1 percent. The chaebol has been complaining that creditors’ capital reduction ratio is too harsh and questioned their due diligence.