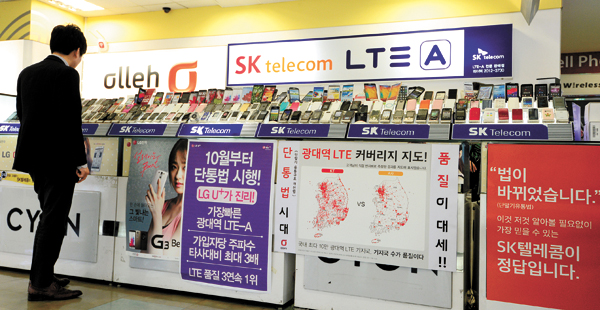 After the revised act regulating smartphone subsidies took effect on Wednesday, the number of people signing new contracts at one of the three mobile carriers has fallen sharply.

On Tuesday, demand for smartphones shot up ahead of the Mobile Device Distribution Improvement Act’s implementation, with 50,318 sold, and the number dropped to a tenth of that on Wednesday.

A total of 4,524 people signed contracts with a new mobile carrier on Wednesday, compared to an average of 16,178 people per day between Sept. 22 and Sept. 26.

The number is far below the standard of 24,000 new signings set by the government to indicate an overheated market.

Subsidies available at the top three mobile carriers were an average of 200,000 won ($188) lower than in the past.

The industry predicts the trend will continue and smartphone retailers are expecting sales to slow.

In the meantime, many people are turning to used phones.

Due to the new subsidies act, consumers now receive the same discount ? 12 percent per month - when signing a new contract even if they bring in a used phone, and total subsidies from the carrier and manufacturer on new devices can’t exceed 345,000 won. Subsidies given on a contract signed along with the purchase of a new device must be proportionate to the price of the phone. In other words, there is no added benefit to purchasing a new phone. Mobile carriers also are required to post the subsidies they are offering on each phone online and in stores, and they can change subsidies once per week.

The three carriers hope to keep their existing subscribers by offering them new deals on data usage, special family plans and more gift vouchers, rather than luring new customers from other companies.

Due to the small discounts, some small retailers are on the brink of collapse.

“After I saw the amount of subsidies that the mobile carriers announced, I worried about continuing the business. Since there will be no consumers, I do not think I will be able to run the store any longer,” said a smartphone shop owner at Gangnam Station, southern Seoul.

Although the new mobile act allows carriers to give an additional 15 percent off, that only amounts to about 10,000 won.