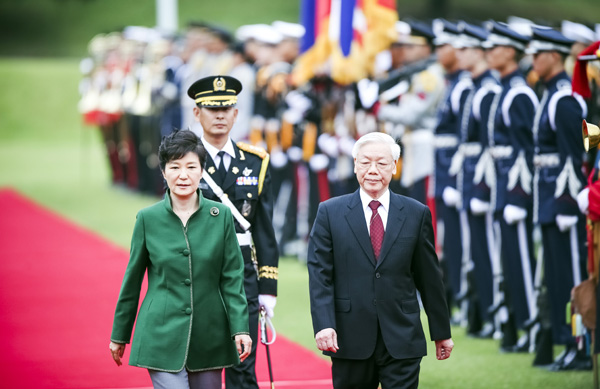 
President Park Geun-hye and Vietnamese Communist Party’s General Secretary Nguyen Phu Trong vowed yesterday to step up bilateral relations with emphasis on bilateral trade and business and to collaborate on bringing the peaceful unification of the two Koreas.

Trong, who heads Vietnam’s two most powerful policymaking bodies - the Communist Party’s Secretariat as well as the Central Military Commission - arrived in Seoul yesterday for a four-day official visit at Park’s invitation.

His trip comes 13 months after the Korean president visited Vietnam, which she chose as the first Asian country to visit after taking office in February 2013.

“Ever since the two countries launched diplomatic ties in 1992, I think bilateral relations have shown dramatic progress in many ways,” Park said at the beginning of a summit meeting. “Progress in economics, in particular, has made notable achievements.”

The two leaders agreed to push ahead with the signing of a Korea-Vietnam free trade agreement by the end of this year and to boost cooperation in trade, investment, large infrastructure construction projects, finance, labor, defense industry and human resources exchanges.

Park and Truong set a goal in September 2013 in Hanoi of bilateral trade reaching $70 billion by 2020. As of last year, the bilateral trade volume totaled $28.2 billion and Vietnam was the fourth-largest investment recipient from Korea.

That system makes Trong one of the strongest leaders in the country.

“I sympathize with [President Park’s] concerns over increasing international conflict and tension within the Asian region and advocate Korea’s plan to lay a foundation for peaceful unification through peaceful resolution of the North Korean nuclear problem and eased inter-Korean relations,” the party chief said in a joint press conference following the summit.

The improvement in bilateral relations over the past few years is largely due to the forging in 2009 of a “strategic cooperative partnership” from the previous “comprehensive partnership,” President Park said.

She added that she and Trong agreed on the need to develop the partnership further - possibly on the sidelines of the Korea-Asean summit meeting scheduled from Dec. 11 to 12 in Busan.