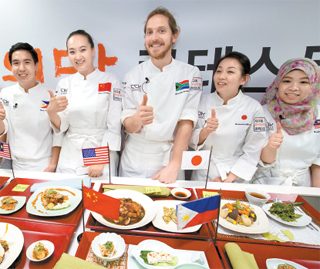 Participants in the 2014 Global Taste of Korea Contest, representing 15 countries worldwide, present the Korean dishes they prepared on Saturday in Jeonju, North Jeolla. By Oh Jong-chan

Five foreign competitors vied for the title of best Korean cook on Monday in the final round of the Global Taste of Korea Contest, held at MBC’s open hall in Mapo District, northwestern Seoul.

The five candidates were given two hours to cook a Korean beef dish and given a score out of 100 points based on the taste of their final product, their understanding of Korean cuisine, technicality and hygiene, according to the contest’s website.

The finalists’ names will not be disclosed until the program is broadcast later this month on MBC.

The five were selected out of 15 candidates at the semifinal event, held Saturday in Jeonju, North Jeolla.

“Some of the 15 participants were technically very good at cooking Korean food,” said Chung Hea-jung, one of the judges and principal of the International Korean Cooking School. “Not to mention, knowledge about ingredients and recipes; they were aware of the philosophy around Korean cuisine.”

Not all the cooks were professionals, however. A student, a full-time house wife and a photographer were among them. In selecting who would advance to the final, contestants were assigned to cook traditional stewed chicken, which they had to prepare in 80 minutes.

“I got to know Korean food about three years ago when I went to cooking school in Italy,” said Cavit Erden, who represented Turkey.

“My dream is to open a traditional Korean restaurant in Turkey to introduce real Korean food in the country.”

He added that spicy, red pepper-paste pork belly was his favorite Korean dish and that, while in Istanbul, he often used to substitute pork with chicken due to the difficulty associated with finding pork in a predominately Muslim country.

Marc Justin, another participant who flew in from the Philippines, said he always kept his refrigerator in Manila stocked with kimchi and that he first fell in love with Korean food when his father brought some home as a gift from his Korean business partner.

“Our family goes out to buy kimchi every week or two,” Justin said. “I think the uniqueness of Korean food lies in the history behind each dish.”

Sponsored by the Ministry of Foreign Affairs, the North Jeolla provincial government and MBC, the contest was organized to promote Korean cuisine internationally.

All 15 participants will serve as Korean food ambassadors for one year.