Sewol kin brawl probe is still ‘he said, she said’

Sewol kin brawl probe is still ‘he said, she said’ 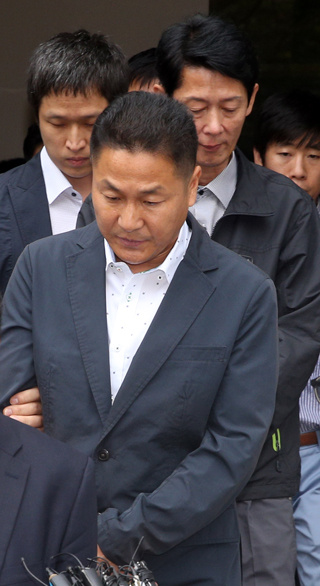 
The investigation into the drunken midnight brawl between relatives of Sewol ferry victims, a hired driver and two passersby has gone on for more than two weeks as the two sides insist on different narratives.

On Sept. 17, five members of the Sewol Family Countermeasure Committee, which represents relatives of 11th-grade students of Danwon High School who died in the April 16 ferry accident, allegedly assaulted the driver and then the two passersby, who tried to break up the fight.

Relatives insist they were attacked by the three.

Kim Hyeong-gi, former senior deputy chairman of the committee, ended up with six broken teeth, which he says proves it was a two-way fight. He says one of the passersby surnamed Jeong hit his jaw from above and caused his injuries.

But lawyer Kim Gi-su, representing the driver and passersby, argues its unclear from CCTV footage whether the former senior deputy chairman’s injuries were a result of the fight or falling.

When requesting detention warrants for three of the five relatives on Monday, the police also said they considered the assault to be one-sided.

Though everyone involved in the scuffle was questioned last month, police said yesterday that Jeong was summoned for additional questioning again over his allegation about his broken teeth.

“Jeong appeared and underwent six hours of questioning,” said an officer of the Yeongdeungpo Police Precinct. “We will decide whether to conduct further questioning or view it as self-defense based on his statement and CCTV footage.”

Another issue is whether New Politics Alliance for Democracy Rep. Kim Hyun, who had invited the relatives out for dinner before the incident, spoke disrespectfully to the driver, who had been called to drive his car home. Rep. Kim had drunk too much to drive himself.

Lawyer Kim accused Rep. Kim of being a co-principal of the assault given that the assault began when she told the relatives to take her business card back from the driver. The police said witnesses have testified that Rep. Kim talked disrespectfully to the driver.

Kim later said, “I didn’t even witness the incident, and I never humiliated or talked down to the driver.”

Another controversy has arisen over former deputy committee chairman Han Sang-cheol, one of the three relatives for whom detention warrants were requested, looking around the scene of incident with a lawyer on Sept. 18, a day before he was called in by the police, which sparked suspicion he tried to destroy evidence. The police cited that in the request for detention warrants for the three on Monday.

But Park Ju-min, a lawyer for the relatives’ committee, said “destruction of evidence” should be cited only when evidence such as CCTV footage was actually destroyed. She added that Han was only looking around the scene to execute his right to defend himself.