After long struggle, a weighty decision pays off

After long struggle, a weighty decision pays off 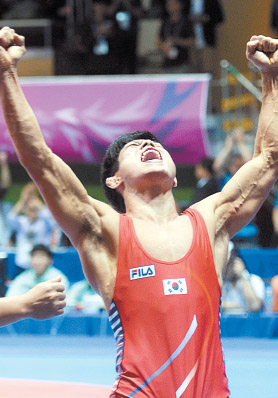 Jung Ji-hyun celebrates after winning a gold medal in the 71-kilogram men’s Greco-Roman competition on Tuesday at Dowon Gymnasium. [NEWSIS]


When wrestler Jung Ji-hyun hung his gold medal around his neck after the men’s Greco-Roman 71-kilogram competition on Tuesday, his thoughts turned to his struggles and perseverance over the past 10 years.

“I haven’t won a gold medal in an international competition since the 2004 Athens Olympics,” said Jung. “There were a million of times that I thought about quitting.”

After Jung won a gold medal in the 60-kilogram (132.3-pound) event in the Olympics, he became a star who received national attention. He appeared in TV commercials, and the nation dubbed him the next Shim Gwon-ho, who swept medals in international events.

But Jung’s fame didn’t last. He failed to live up to expectations at the 2008 Beijing Olympics and 2012 London Olympics, advancing only as far as the quarterfinals.

A despondent Jung resolved that the Incheon Asian Games would be his last stage and promised his two children that he would hand them a gold medal.

He changed his weight class from 60 kilograms to 71 kilograms, a new class added by United World Wrestling (FILA) last December.

Since the 60-kilogram class is the most competitive in Asia, Jung calculated that moving up would increase his chances of making the national team and winning a medal in Incheon.

“I had to wrestle opponents who were way bigger than me, as I went up two weight groups,” said Jung, who is 165 centimeters (5 feet 4 inches).

He used to weigh 69 kilograms and had to add four to five kilograms, which was no easy task.

“Gaining weight was challenging for me,” he said.

When the Asian Games finally came, he faced a crisis in the semifinal in the person of 2011 world champion Saeid Abdvali of Iran.

Jung led the match at the beginning, 4-0, but Abdvali counterattacked with three consecutive moves to grab a 4-6 lead.

Worse, Jung’s shoulders touched the mat for longer than a second, which meant he had been pinned and defeated. But officials ruled that Abdvali’s front headlock before pinning Jung was a foul.

When the match resumed, a re-energized Jung took control and won 9-6. His right eye was swollen by the end of the semifinal.

The final match was comparatively easy, with Jung beating Dilshodjon Turdiev of Uzbekistan, 9-0.

“The ‘power versus power’ strategy didn’t seem advantageous for me,” said Jung. “I reminded myself that speed, technique and endurance were my strengths.”

Jung’s 4-year-old daughter and 3-year-old son were in the bleachers when he stood on the podium to receive his gold medal.

“I’m glad I kept the promise I made to my kids,” he said.