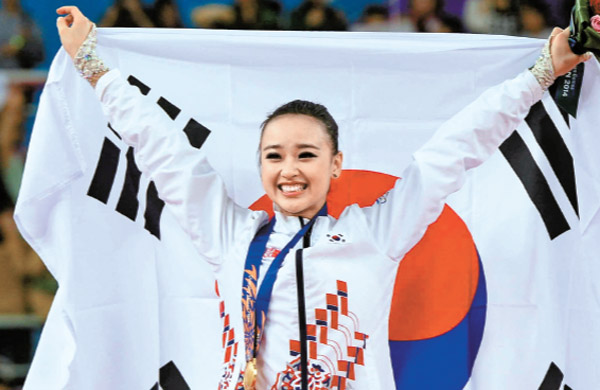 Rhythmic gymnast Son Yeon-jae celebrates after winning the women’s individual all-around on Thursday at Namdong Gymnasium in Incheon. It was Korea’s first gold medal in the sport. [NEWSIS]


Rhythmic gymnast Son Yeon-jae had only one mission after the 2010 Guangzhou Asian Games - win the country’s first gold medal in the sport in Asia’s biggest sporting event.

“Winning a gold medal in rhythmic gymnastics has been something that Koreans couldn’t imagine,” said Son after the competition.

“All the memories of the past four years vanished from my head when I stood on the podium and saw the taegeukgi [national flag] hung on top. Physically, I was in very good condition to have my best performance in front of the home crowd, so I’m very happy.”

As she stood on the podium and waved to fans, the crowd of about 7,000 cheered wildly to congratulate the 20-year-old for her historic performance.

Unfortunately, many people on the Internet dislike Son, and the more famous she got, the more messages were posted, some of which read, “Media outlets are only interested in her because she’s just pretty.” One of her detractors, known only by his surname Kim, 47, was imprisoned for five months for spreading false information about Son on the Internet.

Critics compared Son to figure skater Kim Yu-na, the 2010 Vancouver Olympic gold medalist, saying they don’t understand why Son gets so much attention when she never won a big international competition.

They also say there are athletes in fencing, taekwondo and weight lifting who have been world No. 1 and didn’t receive so much attention.

After the 2012 London Olympics, when a producer of commercials surveyed advertisers about their favorite athletes on the Korean Olympic team, Son, who finished fifth in the individual all-around event, was selected as their favorite.

“She’s cute,” said one, “and her looks impressed many advertisers.”

Since the London Games, Son has made countless TV commercials and as her earnings increased, so did the Internet vitriol.

And people never stopped comparing her to Kim. When she started appearing on TV programs, fans nicknamed her “the next Kim Yu-na,” but many fans of the figure skater said it was nonsense to compare Son to the first Korean to win an Olympic gold medal in figure skating. They also said Son should stop shooting television commercials and practice more if she really wants to be the “queen of rhythmic gymnastics.”

People might think Son grew up in a wealthy family, but she almost quit rhythmic gymnastics because of the training expenses. When she didn’t have 2.5 million won ($2,350) for a uniform, her mother, Yoon Hyun-sook, made one. Her training in Russia cost 30 million won per month, money she earned from those television commercials.

“Since I’m a human being, I emotionally get hurt, but dealing with such issues is part of my job, I think,” said Son. “I will try harder to show that I’m a much better athlete than they think.”