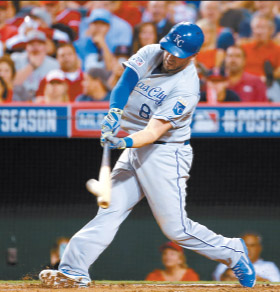 Mike Moustakas of the Royals homers in the 11th inning Thursday against the Los Angeles Angels.[AP/NEWSIS]

Mike Moustakas homered leading off the 11th inning, and the Kansas City Royals kept rolling in their first postseason in 29 years with a 3-2 victory over the Los Angeles Angels in the AL Division Series opener Thursday night.

Moustakas hit the first extra-inning homer in postseason history for the Royals, a high shot off Fernando Salas that barely reached the elevated right-field stands at Angel Stadium.

Alcides Escobar had an early RBI double for the Royals, and their bullpen repeatedly escaped trouble in Kansas City’s first game since that spectacular 12-inning comeback victory over Oakland in the wild-card playoff Tuesday night at Kauffman Stadium.

Game 2 in the best-of-five series is Friday night at the Big A, with Angels 16-game winner Matt Shoemaker taking on fellow rookie Yordano Ventura.

Chris Iannetta and David Freese homered early in the Angels’ first playoff game since 2009, but the majors’ most productive offense stranded eight runners in the five innings before Greg Holland’s perfect 11th.

Winning pitcher Danny Duffy worked the 10th for Kansas City, and Holland picked up the save after arriving at the ballpark about the fourth inning. He went to North Carolina on the Royals’ off day for his child’s birth.