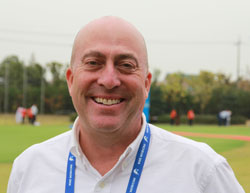 Ever since he was appointed as the Asia-Pacific director of the R&A, the world’s most prominent governing authority for golf, Dominic Wall has sought to increase diversity in the United Kingdom’s most prestigious golf club.

The governing body, established in 2004, is based in St. Andrews, Scotland, and organizes the British Open as well as various other professional and amateur golfing events. Despite its name, however, the governing authority has no relation to The Royal and Ancient Golf Club of St. Andrews, one of the oldest and most elite golf clubs in the world.

Korea is currently one of the most underrepresented countries in the game, though the country’s players have had remarkable success in global tournaments.

“We have a total of 2,500 members around the world,” said the Australian native, who recently visited Korea for the 2014 Incheon Asian Games. “Korea is strong in golf and also it’s also a large economy. We need more Korean members.”

Wall called for more involvement from Korea, though membership comes with prerequisites: joining usually requires recommendations from other existing members.

“We take recommendations from our members. If the member has a good reputation, chances are high that the member’s recommendation will be taken more seriously,” he said.

Despite its long history that dates back to the 1700s, the Royal and Ancient Golf Club of St. Andrews mostly attempted to keep abreast of societal changes, ditching traditions that lasted more than centuries.

But some reforms have come slower than others. The golf club only just decided to accept female members last month, when its existing members voted in favor of women’s involvement.

“I believe the R&A is going to have 10 or so female members in the coming months, and the new decision will bring about change to the male-dominated sport,” Wall said.

Wall previously visited Korea in 1988, when he was working as the sport coordinator for the Australian Paralympic Team when it competed in Seoul.