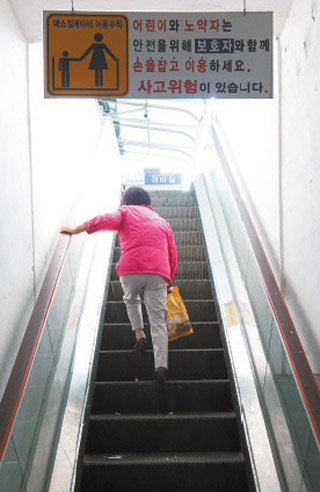 The escalator that took about 1 million dollar to build remains unrepaired after being broken three years ago at Jidong market in Suwon, Gyeonggi. By Kim Seong-ryong


Gwanmunsangga street market in Nam District, Daegu, was awarded 500 million won ($476,500) from the district office in 2011 to build a toilet. You can build a whole lot of toilets with that amount of money, so the association of store owners built a two-story structure that houses a toilet on the first floor and an office for store owners on the second.

“We had much more than we needed to build a toilet in 2011,” said a district office worker who was in charge of the project. “So we decided to put up a second floor for store owners to use as an office.”

When the JoongAng Ilbo visited the Tongbok Street market in Pyeongtaek, Gyeonggi, on Sept. 4, there was a homeless man sleeping on a bench in the two-story customer service building. Aside from the homeless man, no one was inside. It cost 680 million won to build the center, which opened last June as part of a nationwide project to revive street markets. It was only days before the Chuseok holidays, one of the biggest shopping times of the year. But not on Tongbok Street.

As markets in Daegu and Pyeongtaek show, taxpayers’ money has been spent in the name of reviving traditional markets, a mainstay of Old Korea and the commercial homes to many mom-and-pop merchants.

In fact, the money was spent for the sake of using up the budgets allotted.

The scale of waste is not small given that 3.4 trillion won has been poured into modernizing and reviving street markets since 2002 in the face of a decrease in the number of customers because of the emergence of discount chains and supermarkets.

But after the JoongAng Ilbo visited a number of such markets that have been sponsored, questions arose as to whether the central government had done enough screening and come up with the right amount of assistance.

Gwangyang market in Gwangyang, South Jeolla, had a complete transformation in 2012 with the erection of 13 buildings in the style of traditional Korean tiled houses. The city government said the new structures would attract visitors thanks to its “traditional appeal.” For the complete overhaul, 11.4 billion won of taxpayers’ money was spent. Two years later, market store owners complain of a lack of a roof to cover the entire marketplace. The city government thought that would detract from the traditional feeling. But as a result, the market is shunned by customers when it rains or snows.

“I don’t understand why they didn’t put in the roof when every other markets were building them to attract visitors,” said Kim Choon-su, who runs a vegetable store in the market.

The market has now requested 2.5 billion won more from the city government to build the roof.

Jungang market in Daejeon is mired in controversy over its purchase of a parking lot in November 2009. The city government paid 7.4 billion won to buy the 1,693.6-square-meter (18,229-square-foot) plot, or about 14.5 million won per 3.3 square meters.

The JoongAng Ilbo discovered that the city government paid the owner based on an assessed value of the land from 2007. But it made the purchase two years later at the nadir of a real estate slump following the global financial meltdown of 2008.

When asked by the paper, the Dong District office in Daejeon, which made the purchase, said there was nothing wrong in the deal because it had a property appraiser examine the value before it came up with the buying price. But it did not say when the assessment was conducted.

Analysts say to prevent further waste and misuse of taxpayers’ money, a thorough auditing system should be introduced. A system under which associations of store owners are held accountable when they misuse state support is also needed, experts say.

Under the current system, store owners who request state support through their store owner associations are free to decide where to spend the money once their request for support is granted, and no one is responsible for the disappointing outcomes.

Byun Myung-sik, a business professor at Jangan University, said the central government needs to demand the money back from regional governments if it is wasted.

“Markets that fail to produce satisfactory outcomes need to be barred from bidding for additional assistance to take responsibility for their bungled performances and the waste of money,” added the professor.