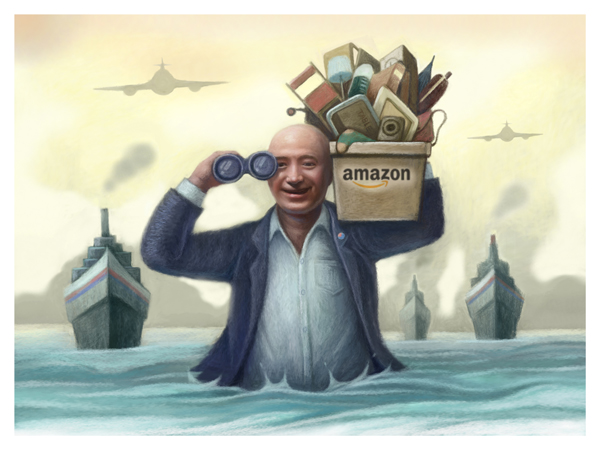 America’s Black Friday might appear to have nothing to do with a young stay-at-home mother living in Seoul. But the beginning of the holiday shopping season happened to be “the moment of enlightenment that reshaped my shopping habits,” said 33-year-old Kim Heo-ryung.

Having moved into a new house with her family, she was looking for a new television on home shopping channels and online markets. But her friend suggested that Kim look outside Korea to save money, citing the day-after-Thanksgiving Black Friday sales offered by global e-commerce sites. The result was striking: $999 on Amazon versus 2.6 million won ($2,483) at local online markets for the same 60-inch television made by LG Electronics. Even with the combined tariff and shipping fees of 380,000 won, the TV from Amazon was more than 1 million won cheaper.

Kim immediately consulted an English dictionary and blog postings to go through the new delivery system and managed to place an order. She later found that many items are much cheaper year round on Amazon and it quickly became her regular shopping destination.

The emergence of savvy consumers like Kim is precisely why Amazon’s potential entry into Korea would pose a serious threat to the local retail industry. 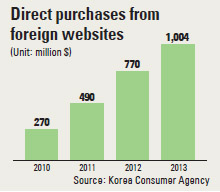 In 2012, Amazon launched Amazon Corporate Services Korea, which has been limited to Amazon Web Services (a cloud computing service) for corporate clients such as Samsung Electronics.

However, Amazon has also made a series of moves seen by many as edging closer to an expansion, prompting news reports that the e-commerce juggernaut is poised to launch online retail services in Korea this year.

In January, Amazon hired Yeum Dong-hoon, former head of Google Korea, as managing director of the Korean branch. Earlier this month, the company posted a recruitment ad for someone to lead the Amazon Global Selling business, which connects vendors to Amazon’s 10 marketplaces around the world, including Germany, Japan, China and India.

According to the job description, the global selling leader will be responsible for “providing feedback and input on new product features relevant to the S. Korean market, and marketing to sellers any new features and business solutions to enable a seamless global selling experience for Amazon’s S. Korean sellers.”

Many see the advertised position as a precursor to offering an online platform and delivery services for local retailers.

“It could be a matter of how and which product line Amazon will launch,” said Lee Seon-ae, an analyst at IBK Securities. “But one thing that is clear by the looks of things is that Amazon is certainly eyeing Korea for its next marketplace.”

The whirlwind of news and industry speculation has sent local retail giants scrambling.

The chairman of Lotte Group, the country’s No.1 retailer, declared Amazon “the next real competitor” at the company’s marketing forum in August.

Shin Dong-bin, the chairman, presided over the first meeting of a special committee dedicated to omni-channel retailing, the same business method used by Amazon. Omni-channel retailing uses all available shopping channels like mobile devices, television, computers and direct delivery in an attempt to provide customers with a seamless approach to shopping.

The heads of AmorePacific and Shinsegae made similar statements.

Cost-conscious consumers are increasingly turning their attention toward overseas direct buying through foreign online shopping malls, presenting a serious challenge for local retailers and an opportunity for foreign e-commerce companies such as Amazon and China’s Alibaba.

The total amount of direct purchases made on foreign websites jumped from $707.2 million in 2012 to $1.04 billion last year, according to the Korea Consumer Agency (KCA). The number of items bought also surged from 7.94 million to 11.16 million over the same period.

Another piece of good news for Amazon: Many Koreans picked the world’s largest e-commerce site as their favorite.

The KCA surveyed 1,000 consumers who have shopped at foreign online malls in the past two years. The results showed that 55.9 percent of responders had shopped at Amazon, followed by eBay at 38.2 percent and 36.8 percent had bought health supplements and organic food from iHerb - all of which are American companies. Four more American businesses placed in the top 10, along with two Japanese companies and one Chinese company.

The growing popularity of foreign direct buying has spawned a number of online forums designed to help novice shoppers. One of the biggest has more than 360,000 members.

“There are detailed guidelines with screen captures and even menus devoted to informing people of the necessary English expressions for the order,” she said.

Kim said that many avid shoppers are young married women like herself.

They have every reason to go for the new shopping channel. They are sensitive to prices, have lots of items they need to buy and are accustomed to using the Internet.

Their main interests are reflected on the list of the most popular items traded on foreign websites.

Of the items sent to the country for consumers from January to April, 27 percent was apparel and shoes, 14 percent was health food, 8 percent was cosmetics and another 8 percent was purses, according to the KCA.

“People who buy goods through foreign websites will be the main customer base for Amazon,” said Ryu Young-ho, deputy director of the contents business division at Kyobo Bookstore and author of the book “Amazonomics.”

“Amazon needs to analyze what they are looking for,” he said.

With the shift to online shopping, analysts have begun to predict the potential victims - from homegrown e-commerce websites and deal of the day sites to television home shopping channels, department stores and bookstores.

Oh Rin-ah, an analyst at E-Trade Securities, said open market sites that have a strong foothold in Korea are most at risk of losing business.

Auction and G-Market, which are owned by U.S. e-commerce giant eBay, have a combined market share of 62 percent, while 11st Street has a 30 percent share.

“Existing e-commerce sites will be seriously affected by Amazon’s entry,” Oh said. “The retail company typically takes an aggressive business approach during the initial periods at the expense of their own revenues. So, Amazon can offer far lower commission fees to attract merchants and take a fair amount of market share.”

Oh added that television home shopping networks could be threatened.

“Home shopping networks have a higher percentage of sales coming from their online malls compared to other traditional shopping channels such as department stores,” he said. “Amazon could pose a direct threat to them.”

Others expect Amazon’s presence to have a more far-reaching impact.

“Amazon specializes in a wide array of businesses including logistics, digital content as well as e-commerce,” said Ryu, the author. “They have even tried their hand at smartphones and televisions. This could threaten the country’s large electronics companies as well in the long run.”

Still, some say that Amazon is not guaranteed to succeed.

A number of global retailers such as Wal-Mart and Carrefour and e-commerce companies like Groupon have either withdrawn from Korea or had to acquire Korean companies to maintain their presence.

“If companies just go ahead with their original Western business model, they will struggle,” said Yoo Byung-joon, a business professor at Seoul National University. “Korean customers are some of the most demanding and sophisticated in the world. Also, big local retail chains are fairly efficient and excellent at grasping what their customers want.”

Other analysts echoed the professor’s view.

“When Koreans shop online, many of them go to portal sites like Naver and do price comparisons on the sites,” said Lee Seon-ae of IBK Securities. “This is something really unique to Korean customers. Other international companies should take this into account.”

The aspect led some analysts to forecast that Amazon will launch its e-book business first before jumping into commerce.

“While they operate their e-book business, they can gather information on Korean customers,” Ryu said.

“This strategy will buy time and have less risk. Amazon’s recent foray into other countries also shows the company’s inclination to the strategy.”