From ballparks to hospitals, robots turn up everywhere

From ballparks to hospitals, robots turn up everywhere

Fanbots, the world’s first cheering mannequin robots, dressed in Hanwha Eagles T-shirts and jeans, hold up LED signs and follow the cheer sequence flawlessly on Sept. 14 in the team’s cheering section at Daejeon stadium. Provided by each company

When Kim Tae-kyun of the Hanwha Eagles batted during a Sept. 14 home game at Daejeon stadium, fans clad in Eagles shirts and jeans in the cheering section held up LED signs and followed the cheer sequence flawlessly.

They looked like a professional cheering group, but they weren’t human ? they were Fanbots, the world’s first cheering mannequin robots.

“Fans who can’t come to the game can send their cheers through the LED screens that the robots hold, and their face appears as the robot’s face,” said Lim Heon-lin, a public relations officer for the Eagles.

The robot generation, which many people usually consider far in the future, is now a step closer to reality.

Robots already are a big part of Koreans’ daily lives, as global IT companies compete to develop new technologies and take the lead in the growing robotics industry. 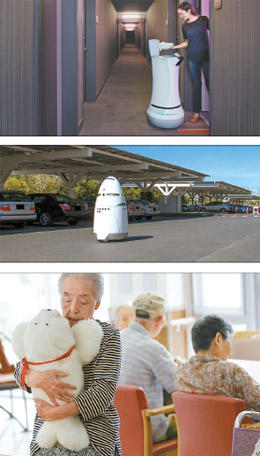 From top: A room-service robot serves orders at a Starwood Hotel in California; a mobile security robot, developed by Knightscope, a U.S. company, patrols streets and parking lots; and a seal-shaped robot called Paro, developed by a Japanese state-run research institute, is widely used at psychotherapy sessions in Japan and the United States. Provided by each company

Daewoo Shipbuilding and Marine Engineering (DSME) is only a few months away from commercializing its wearable robotic suit that resembles the combat robot in “Iron Man.”

Simply wearing it boosts a human worker’s strength sixfold and eventually enhances on-the-job efficiency. The shipbuilder hopes to deploy the robot suits throughout its factories by the end of this year.

And at the publicly run Gangnam-gu Center for Dementia in southern Seoul, a robot called Silbot befriends senior citizens. The Silbot, developed by the Korea Institute of Science and Technology, administers quizzes and leads physical training programs involving song and dance to help combat dementia. The robot boasts more than 30 software technologies, as well as a pool of human intellectual and emotional data. It automatically recognizes faces and can participate in conversation. Already popular at large hospitals and dementia centers, Silbots also are sold to individuals in Korea and exported to Denmark and India, among other countries.

But above all, robots are in our daily lives at home, with cleaning models being the most popular variation. According to Diegieco, KT’s economic and business research institute, last Monday, about 130,000 cleaner robots were sold last year, mostly to help busy working mothers.

Among parents, educational robots developed by telecom carriers are popular. SK Telecom’s robots called Albert and Atti were exported to Taiwan and Malaysia.

Robots also are gaining popularity in the service industry. At Starwood Hotels in California, a robot delivers all room-service orders.

Korean robot developer Yujin Robot has come up with a similar robot called Go Cart, which mainly works at nursing homes delivering food and doing errands. It features a function that can transmit emergency alerts to the nursing home manager. 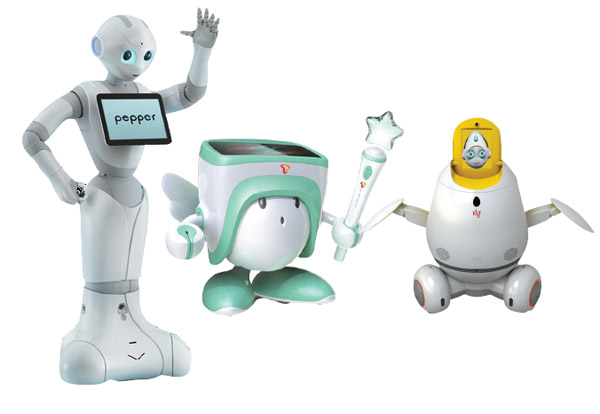 And there are robots in psychotherapy programs. A seal-shaped robot called Paro, developed by Japan’s National Institute of Advanced Industrial Science and Technology, reacts to facial expressions. When someone hugs or touches it, the robot opens its eyes or cries. The Paro is often utilized in psychotherapy for children and seniors in Japan and the United States.

According to World Robotics and the International Federation of Robotics, the share of service robots expanded to 34.9 percent, worth $4.6 billion, of the whole robot market in 2012. That compares to 14.3 percent, worth $643 million, in 2003.

Robots are becoming important in security, shipping, surgery and other areas.

Knightscope, a U.S.-based robot developer, rolled out a mobile security robot that can roam around on patrol. The robot has small oval-shaped wheels, a thermal camera, sensors that recognize vehicle license plates and radar. When the robot patrols a parking lot or street, it blinks to signal danger when it detects variations in preregistered information.

First developed in 2003 for kidney and prostate gland surgery, the DaVinci robot minimizes incisions and so far has completed about 60,000 procedures worldwide, including sophisticated operations.

According to the Wall Street Journal, Amazon is saving $916 million per year with a shipping management robot originally developed by Kiva Systems. Amazon acquired the company last year.

In recognition of robots’ business potential, global IT companies are expanding investment in robotics or acquiring small robot companies.

Andy Rubin, head of Google’s robotics division, explains that the robot business is part of the company’s vision for the next 10 years.

Intel unveiled its new robot named Jimmy at its developers’ forum in early September. Customers can create their own Jimmy with customized functions by using a 3-D printer. The Jimmy assembly kit is priced at about $1,600.

Amazon currently is testing unmanned drones for use in shipping and deliveries. 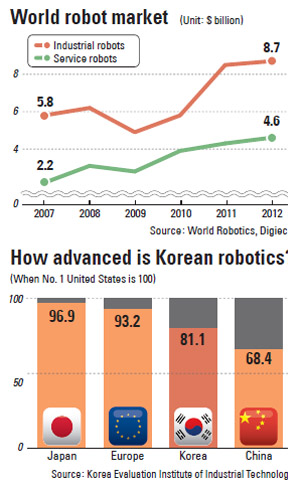 One of the most significant reasons why these global IT companies are jumping into robot businesses is to stake out their place in operating system platforms used to build robots.

In robotics, as with smartphones, software performance is as important as hardware. A robot’s functions depend in large part on which operating system it uses. So the clearest way to become a market leader is to develop as many systems as possible.

“The competition to occupy robot platforms is as fierce as that from the smartphone platform market,” said Kim Tae-jin, a researcher at Digieco. “Google, especially, hopes to introduce a robot operating system platform that can interface with its existing platforms. The company can profit by [its robots customers] purchasing applications in the Google App Store.”

According to a report by Mackenzie, the entire robotics industry is estimated to grow up to $4.5 trillion in the next 10 years.

However, Korean robot technology still lags behind that of advanced nations.

Korea first jumped into robot development in 1990, about 30 years later than the United States and Japan.

According to another report published last year by the Korea Evaluation Institute of Industrial Technology, the level of Korean robotics is only 81.1 percent if American technology is at 100 percent. Japanese technology was evaluated to be 96.9 percent and Europe at 93.2 percent.

“In Korea, there is a social prejudice that robots can be a significant threat to employment,” said Baek Bong-hyun, head of policy development at the Korea Institute for Robot Industry Advancement. “But recent studies say the robotics industry will have a higher economic impact than the average of the manufacturing industry.

“As the market is drastically growing, the government should come up with policies to promote the local robotics industry, especially its globalization.”