The National Museum of Korea’s exhibition on blue-and-white porcelains from the Joseon Dynasty (1392-1910) displays 500 pieces, including 10 national treasures. [JoongAng Ilbo]

During recent sales of ancient, modern and contemporary artworks held by Seoul Auction on Sept. 23, the brightest star was a Joseon Dynasty (1392-1910) white hexagonal incense burner with blue flowers.

The item sold for a whopping 1.35 billion won ($1.28 million won), the highest amount at the auction. Its starting price was 900 million won, but after a heated competition among bidders, the price quickly soared to 1.35 billion won. The audience burst into loud applause as the winner was confirmed.

Blue-and-white porcelains from Joseon are often the best-selling items at important auctions, which is also the case abroad. At Christie’s in New York last September, for instance, a 19th-century blue-and-white jar decorated with tigers sold for $939,750, much higher than the estimated $40,000 to $60,000.

Now, there is a rare opportunity to enjoy hundreds of carefully selected blue-and-white wares from Joseon - without the hefty price tags. The National Museum of Korea is holding an exhibition of porcelain pieces from the Joseon era, its first and the largest dedicated solely to the blue-and-white pieces, the organizers claim.

“Blue-and-white porcelains, which requires both exceptional craftsmanship and painting skills, embodies the essence of the aesthetics of the royal court,” Kim Young-na, the museum’s director general, told reporters last week.

Blue-and-white porcelain is created by drawing on white porcelain using pigments containing cobalt, which was produced in Persia and imported through China during the Joseon era. 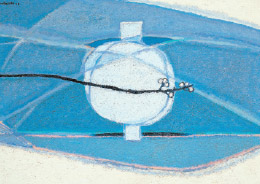 The exhibition also displays some modern pieces influenced by the aesthetics of Joseon’s blue-and-white wares, including “Jar and Plum Blossom” (1958) by Kim Whan-ki (1913-74).

As a result, cobalt was extremely expensive - more so than gold - and was exclusively used by the royal court.

“Unlike Chinese and Japanese blue-and-white wares, which were produced primarily for sale and trade, each Joseon blue-and-white porcelain piece was individually handcrafted by expert craftsmen according to the strict standards of the royal court,” Kim said.

Blue-and-white porcelains were first made during China’s Yuan Dynasty (1271?1368) and were exported abroad during the Ming Dynasty (1368?1644), which introduced the “Chinoiserie” style, or Chinese influences in art and design, to 17th-century Europe.

Art historians say Joseon was the second to make blue-and-white porcelains after China - sometime in the 15th century.

That is why some artifacts among the 500 on display are also Chinese and Japanese. 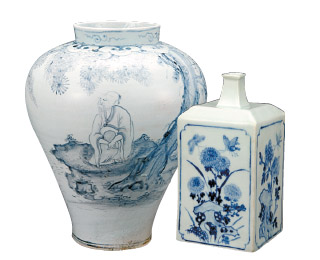 Pieces previously owned by the Joseon literati show drawings of Chinese sagas (left) or nature (right).Provided by the museum

However, organizers emphasize that although Joseon’s blue-and-white porcelain had its basis in the Ming Dynasty’s wares of the same color in terms of general format, the nation also managed to develop its own styles.

“Joseon blue-and-white porcelains had unique traits although they are hard to describe in words,” said Lim Jin-a, one of the curators at the museum.

“But most art historians say Joseon blue-and-white porcelains were more pictorial. They also did away with ancillary patterns and instead made a use of blank spaces.”

According to Lim, as Joseon was the country of Confucianism, it put a lot of emphasis on rituals and certain courtesies are marked on these porcelain pieces. On example is the blue-and-white Epitaph Tablets of Princess Consort Heungnyeong. The 15th-century piece, National Treasure No. 1768, is believed to be Korea’s oldest blue-and-white porcelain tombstone in existence today.

Perhaps the most striking section of the exhibition is dedicated to blue-and-white porcelains owned by the 18th-century literati. The room is filled with milk-colored pieces adorned with subtle yet tasteful drawings.

Eighteenth-century Joseon - ruled by King Yeongjo (1694-1776) and King Jeongjo (1752-1800) - is thought to have been the heyday of arts, literature and culture as the two kings were strong supporters of these areas. As a result, it was in this era that writers and poets began collecting blue-and-white porcelain pieces, which were formerly reserved for aristocrats.

Naturally, whereas symbols that represented royalty such as dragons were prevalent on past Joseon pieces, items featuring natural landscapes and Chinese poems were favored by the literati in this era.

“The porcelains may have been to hold flowers, alcohols and so on,” Lim concluded. “However, we believe they were also to be appreciated as artworks in their own right.”

Lim said that many of the pieces in this section were produced when the royal kilns were located in Geumsari region in Gwangju, Gyeonggi, adding that Geumsari porcelain is famous for its beautiful milky tint. The royal kilns were operated in Gwangju, but every several decades they moved to a different site within the city as their operation consumed many trees.

Another highlight of the exhibition is dedicated to contemporary artworks that are inspired by the blue-and-white wares of Joseon. Some are obvious choices, like the works by Kim Whan-ki (1913-74) who often drew moon jars.

“Everything I draw comes from [Joseon] porcelains and so are my colors,” Kim is known to have said. 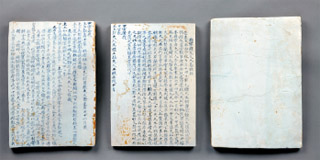 Blue-and-white tombstones are rare pieces as not many remain today. Provided by the museum

Others include Lee Ufan’s drawings as well as ceramic pieces by Park Young-sook, Lee Young-ho and Kwon Young-shick.

Using blue on a white background has carried on for generations in the history of Korean aesthetics, organizers said, adding that the contemporary section is aimed at showing how the spirit of blue-and-white porcelain is still very relevant in the national art scene today.

“In Blue and White: Porcelains of the Joseon Dynasty” runs until Nov. 16 at the special exhibition gallery of the National Museum of Korea in Yongsan District, central Seoul.