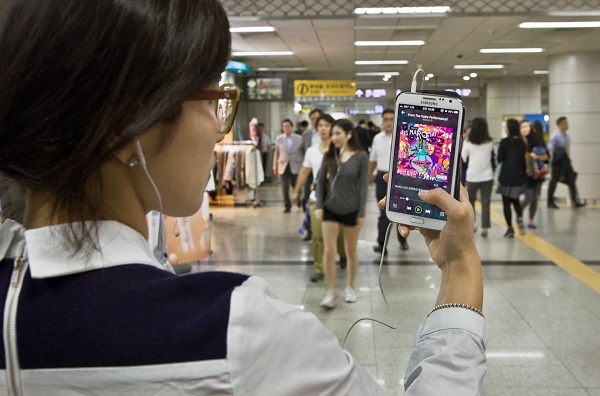 When Jeong Ye-ji, 31, heard early last year that her monthly rate for subscribing to on-demand streaming services using digital music provider Melon would double after the government’s new revenue sharing system was enforced, she thought about stopping her subscription and going back to illegally downloading songs.

But when Jeong realized that the price rise was the Ministry of Culture, Sports and Tourism’s effort to “protect the rights and interests of musicians and songwriters,” she decided to maintain her subscription.

Jeong now pays 6,000 won ($5.77) a month for Melon’s streaming service. But before long, she said she started having second thoughts.

Recently, local media covered stories where musicians and songwriters were quoted saying they haven’t seen much difference to their bank statements since the rise in subscription fees. Several musicians disclosed the payments they received from one of the music service providers for copyright royalties and the posts were quickly broadcast on social media.

One indie musician said he had received 662 won for a song that was streamed 97 times that month. The musician complained of “unreasonable earnings as a musician” and said he doubts whether there will be any artists left in the country because payment is so low compared with such a high amount of work.

“Even though I’m paying twice as much than I used to for the sake of the musicians, it doesn’t seem to be reaching them,” said Jeong. “I don’t see any more reason to continue [subscribing to the service].”

When the Culture Ministry announced early last year about the change in the revenue sharing guidelines that allow “creators” - referring to producers, singers, band members and songwriters - to receive a larger piece of the pie from copyright royalties, it said the increase would be made gradually until 2016. As for streaming services, a music market that has been growing by 44 percent annually according to Gartner, songwriters and musicians had been receiving 1.8 won to share between them, an increase of 3.6 won since last July. As a result, digital music providers - distributors like Melon, Mnet, Bugs and Soribada - said it is “inevitable” for them to raise their service charges. 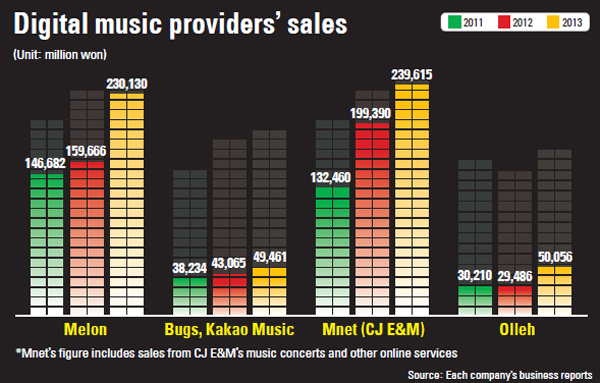 Most of the services provided by the distributors have doubled in price since last July. However, from fear of losing customers, many providers began to offer discounts and held promotional events so that the actual increase for consumers is about 1,000 won to 2,000 won per month.

But as this is an ongoing process, the price will continue to rise until the Culture Ministry announces the final guidelines. To illustrate, if it decides to increase the streaming service share to 5 won per song from the current 3.6 won, the distributors will increase their monthly streaming service charges by at least 5,000 won.

Lee Yoon-hyeok, manager at the Record Label Industry Association of Korea, said subscription fees for digital music services are relatively low in Korea because of competition with Soribada, the infamous peer-to-peer site that allowed illegal downloads of music tracks.

The slumping sales of physical albums are no longer surprising as music download sales have already tipped into decline as well. Streaming services have become one of the most common methods of listening to music. According to Melon, the country’s leading digital music provider with the highest market share, 97 percent of its subscribers are signed up to its streaming service.

And the trend is global. Even Google, followed by Apple, has recently jumped on the bandwagon.

But in Korea, a change in the digital music market is driving artists over the edge with a distribution system they describe as “unequal.” Artists say they are not paid enough for the work that they are producing. Despite the modified revenue sharing guidelines to help songwriters, digital music distributors currently take 40 percent of the profit while copyright holders or musicians and songwriters share 16 percent. The production company or the record label takes the rest, or 44 percent. 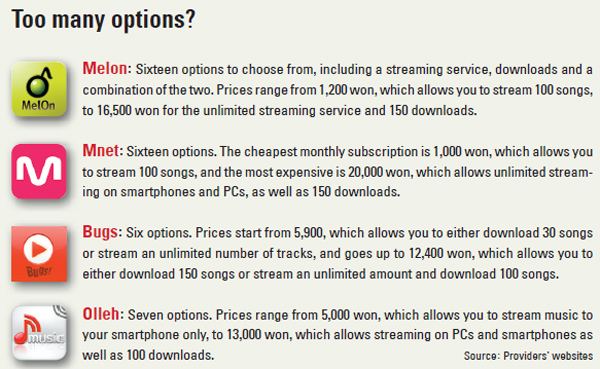 “In order to settle the legal market in Korea, the government pushed ahead with a low price model and it continued until today,” said Lee, criticizing the government’s initial policy. “They thought they could adjust the price after a little while, but they couldn’t, and now it’s pushing out musicians and producers.”

To make matters worse, the Fair Trade Commission revealed in June that several digital music providers engaged in wrongdoings. According to the commission, four digital music providers - Melon, Soribada, Bugs and Mnet - should have received an explicit agreement from consumers before withdrawing an automatic payment from them for an increased amount. Melon, Soribada and Mnet informed customers through their websites and sent out emails, but the commission said they did not make them read and agree to the price increase, which is mandatory.

On the other hand, Bugs, according to the commission, informed consumers online and made them click to approve a price increase, but still withdrew the same increased amount from all of its subscribers, including those who did not confirm the agreement.

The Fair Trade Commission said it has ordered the distributors to correct their mistakes.

Such misdeeds infuriated many consumers, who decided to listen to music using other methods or even considered going back to their old habits of downloading music illegally, which has made it worse for the musicians and songwriters.

“I just listen to music using YouTube these days,” said a 32-year-old surnamed Lee, who recently withdrew his monthly subscription to Mnet’s unlimited streaming service and 30 MP3 file downloads after the issue surfaced.

“The Internet is fast enough,” Lee continued, “and I subscribe to an unlimited data service, so I have no problems listening to music on YouTube.”

While it’s true that those in power should not deceive consumers or take advantage of artists, while decision-makers should make efforts to mediate between different parties for a healthy digital music culture, music industry insiders seem united in feeling that listeners’ attitudes about consuming music must also follow suit.

With the current market structure, such fair competition cannot be realized, he said.

Rep. Lee also pointed out that the current subscription rates for digital music services are too low.

“I’m concerned that this generation may even lose the concept of ‘paying for music content, which is a pure creation,’ by consuming music at such a low price,” said Rep. Lee, insisting that fees should be elevated for the sake of the creators, not the service providers.

“We often say musicians are on the verge of starvation as it’s difficult for many of them to earn money. But these days, it should be musicians on the verge of death,” said Rep. Lee. “If artists like them can’t make money as much as their efforts, they’ll ultimately stop creating quality music. Consumers must realize that this means losing opportunity for them to listen to good music.”

Lee said his association has tried various movements geared towards making the decision-makers and consumers “stop dumping music” and urged distributors to “stop treating it like some sort of added-value product of smartphone services. It made Korean consumers regard digital music that can be consumed in bundles when they use smartphone services.”

To illustrate, Spotify, a music streaming service that was launched in 2008 by a Swedish start-up, only has one premium service set at $9.99 per month. Yet it had 10 million paid subscribers as of May, according to its official website.

Timothy Kim, 25, a subscriber to Spotify in New Zealand, said he was surprised to hear some Koreans consider 6,000 won a month expensive for such a service.

“Maybe if we have that fast Internet like Korea and that many options, I might have different opinions,” said Kim. “But I am happy paying 13 [New Zealand Dollars, or about $10.5] a month for the service. When you think about it, it’s not that expensive. It costs the same [as] a single movie ticket. But this gives you unlimited access to all songs you want to listen to for a month. That’s a great deal.”

Guitarist Shin Dae-cheol, 47, of the legendary rock band Sinawi, says he may have a solution. He is one step away from opening a “Correct Digital Music Distribution Cooperative,” which he believes will prove that “Korea too can engage in a fair and rational distribution of digital music.”

Shin said he’s done some research and found out that it’s difficult for an ordinary individual to listen to more than 500 songs a month.

“For monthly subscribers of a 6,000 won streaming service, it’s like paying 3.6 won per song. Since it’s difficult to listen to more than 500 songs a month, they are listening to only 1,800 won worth of songs, but are paying 6,000 won a month for the service. Where does the remaining 4,200 won go? Of course, none goes to the artists as their songs haven’t been played, but to the pockets of distributors,” said Shin in a recent interview with the JoongAng Ilbo. “At this cooperative site I am creating, I am going to charge them as much as they listen and give more back to the artists. I’ll charge listeners twice more than existing services - say 7.2 won per streaming one song. Even if they listen to 500 songs a month, it’ll only cost them 3,600 won, not 6,000 won.”

Melon: Sixteen options to choose from, including a streaming service, downloads and a combination of the two. Prices range from 1,200 won, which allows you to stream 100 songs, to 16,500 won for the unlimited streaming service and 150 downloads.