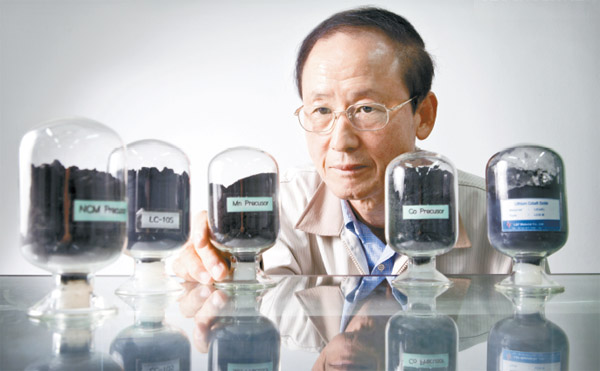 With the interest in environmentally friendly products and efficient use of energy higher than ever, Korean battery makers like Samsung SDI and LG Chem are riding high in the global market with the growth of new products such as electric cars and energy storage systems (ESS).

A small battery material developer based in the village of Waegwan, Chilgok County, North Gyeongsang, is at the core of the success. 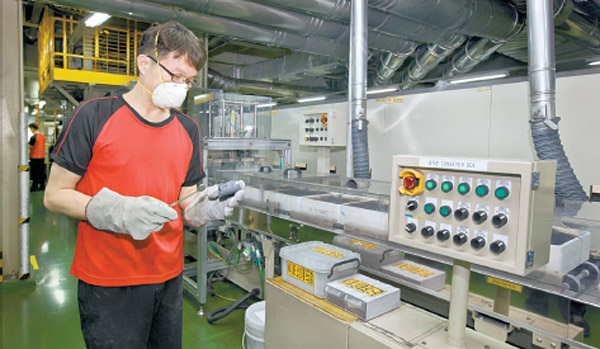 L&F Material is the nation’s largest maker of materials for secondary batteries, particularly cathode active material used for the positive and negative poles of batteries. Exports surpassed $100 million in 2012, mostly to developed nations like Japan, Europe and the United States. Sales grew to 143.1 billion won ($134.8 million) last year, from 270 million won in 2006. Over the past five years, they have grown an average of 47.2 percent annually.

In Korea, where R&D is still a cost hurdle for small and midsize companies, L&F Material also has its own R&D center where almost 20 percent of its employees work. The company now operates three production facilities, one at the Waegwan headquarters and two in Daegu.

The leadership and decision-making of CEO Lee Bong-won were essential for such quick growth.

Both the company and Lee started with no background in battery materials in 2005. The mother company L&F was in the LCD panel backlight business and decided to establish an affiliate to explore secondary batteries. Lee had spent most of his career in aluminum manufacturing.

In 2005, the secondary battery industry barely existed in Korea. Secondary batteries are rechargeable and usually used to store power for electronic devices like cell phones and laptops.

And Samsung SDI and LG Chem were in the early stages of their battery businesses, importing technology and materials from traditionally strong battery nations like Japan.

One tool to attract talent was stock options, which even now is not common in Korea.

“Ten years ago, we couldn’t give large sums of money, but this definitely was an efficient tool when persuading technology experts and industry workers,” said Lee, “because this policy gets employees to think they are owners of this company, making it part of their lives. Our company is a success that we nurtured together.”

As company growth skyrocketed after 2007, stock options acted as a motivator. The company only grants stock options to a handful of employees in proportion to their level of contribution. He sees giving back to employees as not only a benefit, but an alternative form of investment.

“My career started as a regular employee at a midsize company, so I totally understand their minds,” said Lee. “Throughout my career, I always wondered why the company didn’t compensate employees enough, even when the company sees its profit going up.

“I thought a company should give back to the employees, whether it is a financial incentive or an academic opportunity for their career development.”

After L&F Material opened its research center in 2007, the company received technology mentoring from Japanese engineers and had joint projects with the top-tier companies for which they worked.

In the early years, the R&D center mainly researched accelerating the commercialization of technologies for small batteries for mobile phones. The company focused on cathode material, which makes up 33.5 percent of a secondary battery.

Before the company tackled it, cobalt was the most common ingredient in cathode material.

In 2012, the company exported its NCM to Japan.

“The first export to Japan was one of the most meaningful moments for us, because in the past, Japan considered itself as the ‘suzerain of battery and battery material,’ producing global battery makers like Sony and Sanyo,” Lee said. “Since the country had very sturdy industry, it wasn’t so easy to enter the market by appealing to them with our own original material.”

Recently, it started developing materials for midsize and large batteries in response to worldwide demand for electric cars and ESS facilities.

The company invested about 5 percent of its annual sales in R&D as of the first half of this year, and it hopes to develop more original materials.

“Japan is no different. Japan is still technologically advanced, and its government still backs its battery industry in the same way as the Chinese government,” Lee added.

Lee explained more about his company’s relationship with China, one of L&F Material’s largest overseas customers. And the company has a cooperative company there.

“Even though Chinese companies are strong competitors, the country will remain our customer, in particular in small batteries, because of the massive market thee for portable electronic devices,” he said.

Other significant markets are Europe and the United States, which mostly demand midsize and large batteries for electric car and ESS developers.

“Currently, the world battery market is roughly shared by three East Asian countries: Korea with 40 percent, and Japan and China each with 30 percent,” Lee explained. “The industry was structured like this mainly because of the IT and mobile industries’ explosive growth.

“However, the next destination for us is the United States and Europe, where we will offer materials customized for those bigger batteries. Development of electric cars and ESS is our opportunity to tap larger markets.”

Lee said he will continuously emphasize R&D because it will be essential when L&F Material has to meet those market needs in the future.

“There are more companies in Daegu and North Gyeongsang that generate sales larger than us in multtrillion won range.” said Lee. “But the only thing small companies like us [in rural regions] lack is quality talent,” he said. “Of course, we already have great talent, but the problem is that not many people are eager to work in rural areas.”

So far, the company has run talent fostering and exchange programs with universities in the region and prestigious universities, like Seoul National University and Kaist,in other parts of the country.

Lee said the government should push harder for balanced regional development so top-tier talent will consider rural-based companies if life and industrial infrastructure is well developed.

“Who would choose to a rural village instead of Seoul-based conglomerates and Gyeonggi?” said Lee. “Even though we are doing some talent exchanges, that’s not enough just because there are only a limited amount of new material graduates. Seoul universities teach this area, but most graduates will hope to work in Seoul, while it is hard to find universities outside Seoul that teach this area.”

* Plants: Three (one in Chilgok and two in Daegu)