Stalled relations between the two Koreas saw a major breakthrough over the weekend as North Korea sent its top leaders to the South and agreed to restart high-level government talks.

In a surprise visit, a North Korean delegation arrived at the Incheon International Airport on Saturday morning to attend the closing ceremony of the Incheon Asian Games.

The group met with top South Korean officials, including the national security chief of the presidential office, over lunch.

The 11-member delegation was led by Vice Marshal Hwang Pyong-so, a rising star in Pyongyang’s inner circle and considered the second most powerful man after North Korean leader Kim Jong-un. 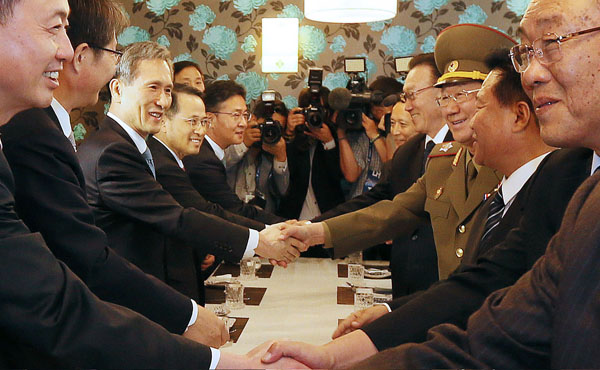 Top officials from both Koreas gather for a rare meeting on Saturday at a restaurant in Incheon. Kim Kwan-jin, the national security director of the Blue House, third from left, and Hwang Pyong-so, the top political officer of the North Korean People’s Army, third from right, are pictured shaking hands. [NEWSIS]

Hwang, who has been promoted five times this year alone, is the new director of the General Political Bureau of the North’s Korean People’s Army and the vice chairman of the powerful National Defense Commission.

Other North Korean representatives included Choe Ryong-hae, who is currently a Workers’ Party Central Committee secretary and the chairman of the State Physical Culture and Sports Guidance Commission. He previously served in Hwang’s position as vice chairman of the National Defense Commission.

Kim Yang-gon, a top party official in charge of South Korean affairs who orchestrated a series of inter-Korean talks in recent years, was also among the delegates.

During their half-day stay in the South, they attended a tea hosted by Unification Minister Ryoo Kihl-Jae and had a power lunch that lasted an hour and 50 minutes.

Following the meeting, the Unification Ministry announced that the two nations will resume high-level government contact at the end of this month or in early November.

Officials from the Park Geun-hye administration and the Kim regime had their first round of high-level talks in February, though the meetings have been suspended since.

The North Korean delegation appears to be the highest ranking to visit the South so far. Hwang and Choe are considered the second and third most powerful officials in the regime, and it is the first time that the director of the General Political Bureau, who oversees ideology, organization and appointments in the North’s military, has visited here.

“By dispatching its General Political Bureau director, the North is sending the message that it wants to improve relations with the South,” said Jeong Se-hyun, a former unification minister. “This is a critical opportunity for the two Koreas to facilitate a breakthrough, and the government must respond wisely.”

The minister and other ministry officials said no other specific message from the North Korean leader had been relayed to Park, however, including a letter.

Observers speculated yesterday that the delegation’s appearance in the capital was meant to silence rumors surrounding Kim Jong-un’s health. The North Korean commander has not appeared in public since Sept. 3, leading to speculation that he may be ill.

According to Minister Ryoo, Kim Yang-gon reassured him that Kim has no health-related issues.

Government officials also said that the North Korean regime is stable, despite rumors that Kim is sick, especially considering that the regime’s top officials were given permission to leave Pyongyang.

“Kim wants to show the world that he is in complete control of the North and has no health problems,” Representative Park Jie-won said on his Twitter account. “He also sent a message to the South to improve inter-Korean ties.”

Rep. Park, a member of the main opposition New Politics Alliance for Democracy, was a primary architect behind the historic 2000 inter-Korean summit.

Because the delegation included heavy-weight politicians, analysts also believe they carried a special letter from Kim to President Park. While the delegates relayed to officials in Seoul their leader’s greetings to the president, they declined an offer for a visit to the Blue House to be arranged.

“President Park was willing to meet with the North’s delegation, but they said they came here for the Asian Games’ closing ceremony. So the Blue House visit did not take place,” a Unification Ministry official said.

According to sources familiar with the situation, government officials told the North Korean commission that they were willing to prepare a meeting with Park if it wished, though the officials declined, citing time constraints.

The delegation left Pyongyang around 9 a.m. aboard a plane that serves as Kim Jong-un’s exclusive aircraft, and arrived at Incheon International Airport around 10 a.m. on Saturday. They visited their national team at the athlete’s village around 3:50 p.m. and met with South Korea’s Prime Minister Chung Hong-won and National Assembly leaders in the evening.

After attending the Asian Games’ closing ceremony, they returned to North Korea around 10:25 p.m.

But the delegation’s visit also appeared to have a domestic agenda. The young ruler has used sports as a tool to unite the country that he inherited from his father, and the North Korean team’s strong performance at the Incheon Asian Games provided further propaganda fodder for Pyongyang, sources said. Choe, who took over the North’s top sports post after the execution of Kim’s powerful uncle, Jang Song-thaek, was included in the delegation for that purpose, they said.

Experts added that the surprise visit by top officials could also be viewed as a desperate attempt by Pyongyang to engage Seoul. North Korea has increasingly made efforts to engage Japan, while attempting to talk to Washington by using American prisoners as bargaining chips, moves that both point to Pyongyang’s deteriorating relationship with Beijing, which has been on the rocks since the regime’s third nuclear test in February 2013 despite China’s opposition.

Following the delegation’s visit, however, Seoul officials, were optimistic that the inter-Korean relations could be restored.

“They didn’t come here with a predetermined agenda to negotiate,” a senior Unification Ministry official said yesterday. “They came here to say that the two Koreas must make a bold decision and act on it.”

Another government official added that the delegation came here mainly for the Asian Games, but also addressed inter-Korean relations in a broader context. “It is small, but meaningful that the two Koreas reached a consensus that they should work together and resolve pending issues,” he said.

While no specifics over the upcoming high-level talks were worked out at the Saturday meeting, the South is sure to address its economic sanctions on the North.

After Pyongyang torpedoed the ROKS Cheonan in March 2010, the Lee Myung-bak administration imposed sanctions, better known as the May 24 measures, on North Korea to cut off all trade and exchanges.

The North has consistently demanded that Seoul lift the sanctions, although the government has maintained that the North must apologize for the warship’s sinking, as well as the shooting death of a South Korean tourist at the Mount Kumgang resort in 2008.