Not your granddad’s family idea

Not your granddad’s family idea 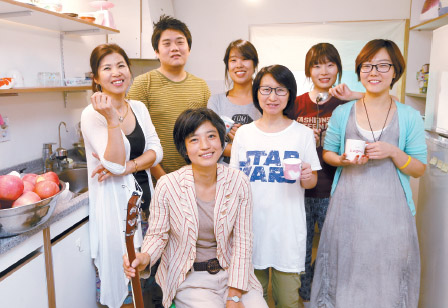 Residents from the hamgge jutaek cooperative, which literally means “housing together,” including its leader Park Jong-suk, third from left, gather together at an open house on Sept. 20. The 10 residents currently living there had no past connections and have since created their own “social family.” By Kang Jung-hyun

For about a year after her husband passed away, 75-year-old Yu Su-yeon lived alone in her apartment in Nowon District, northeastern Seoul, and grew used to spending her days in solitude.

Though in what was perhaps a fortunate turn of fate, she recently acquired a new granddaughter, named Lim Min-gyeong.

But Lim, 20, is not a biological relation. Rather, she became a part of the family through a special program promoted by the district office in Seoul that partners young people with seniors living alone.

Now, the young woman wakes up each morning in a safe home to the smell of cooking, while Yu has a built-in friend and companion.

The two women are reflective of the broad changes taking place across Korean households this year alone. Families with biological links are decreasing, while social families made up of non-relatives are on the rise. These arrangements have often been referred to as the “family beyond the family” because of their deviation from the traditional nuclear family.

The biggest reason for the increase has been the surge in the number of single-person households. To make up for the lack of a traditional family, many living alone - a group that encompasses young people, the aged and even divorcees - have reached out to other single people to fill what they may perceive as gaps in their social lives or the need for companionship.

From Sept. 18 to 19, the JoongAng Ilbo attempted to profile the emergence of the social family through a survey of 50 people in their 20s and 50 people aged 60 and older.

When asked whether they regarded roommates without any biological or legal relationship as family, 54 percent of the respondents in their 20s answered affirmatively, with 28 percent in the latter group agreeing.

Those figures are about double the percentages recorded in a 2002 survey by Dongduk Women’s University Professor Nam Gi-cheol. At the time, only 18.6 percent of those in their 20s responded positively, while 14.3 percent of those 60 and answered affirmatively.

Additionally, in the JoongAng Ilbo’s survey, 36 of the 100 people polled answered that they could plausibly be closer to and more familiar with their neighbors as opposed to relatives who lived far away.

Incidentally, the change in family structure has also led to a shift in perceptions about what, exactly, constitutes a family.

Certain arrangements that generally were not considered familial are now more socially accepted. When the JoongAng Ilbo asked the 100 respondents if they regarded pets as family members, 54 percent of those in their 20s and 16 percent of those 60 and older answered that they did.

“The definition of families is expanding beyond traditional stereotypes,” said Kim Hee-yeon, a researcher of the Gyeonggi Research Institute, in assessing the result.

Illustrative of that is the emergence of what is known as a share house, in which each member retains his or her privacy while still interacting with their roommates in a familial way.

Hamgge jutaek - which literally translates as “housing together” - is one such co-operative in Mapo District, western Seoul. Its residents, complete strangers before they met, all responded to the same online notice. They’ve now become like family, eating breakfast and dinner together each day.

“I came from another part of Korea and had no acquaintances in Seoul,” said Kang Suk-jin, 31, one of the inhabitants. “I applied for the share house because I missed the closeness that there is among family.”

Other types of social family units have also popularized among young people - the babteodi, for instance, a word portmanteau of bab, which means “meal” in Korean, and “study.”

Social dining has also emerged as a new trend, and Internet services like Zipbob, in which members voluntarily host meals or other activities, have gradually increased.

“In Korean society, the bond built while eating together is particularly strong,” said Professor No Jin-cheol, who teaches sociology at Kyungpook National University. “Given that single-person households have consistently risen, social families such as babteodi or Zipbob will further increase.”

But despite positive steps in handling the shift, the new reality doesn’t come without its consequences, especially for those living alone.

According to research by the Korea Institute for Health and Social Affairs, each generation has experiences a unique set of difficulties. Those in their 20s and 30s often have financial troubles, while those in their 40s and 50s mostly suffer from a sense of loneliness. And those in their 60s or older may lack someone who can care for them as they age.

But experts say these problems can be offset when multiple generations live together.

“Multiple-generation cohabitation, which began in 2006 in Germany, is being introduced to Korean society,” said Professor Jeong Jae-hun, from Seoul Women’s University.

“Those generations will be able to take care of one another once they come together and reorganize [the family structure].”

To deal with the social issues that have cropped up with the increase in single-person households, analysts recommend an overall expansion in the concept of family as an effective measure.

Some local authorities have already begun to support the idea of the social family unit.

The Seoul Metropolitan Government is planning to establish 48 new cohabitation towns, setting aside 144 billion won ($137 million) for the project. On Sunday, the Seoul government also opened its new co-operative share house, in which multiple households live under one roof.

The Gyeonggi government, meanwhile, has since last year provided in Anyang and Gwangmyeong what are known as Carnation Houses - share houses for the elderly who live alone - as well as jobs and medical checkups for the aged.

“The problem is that it is hard to secure land or buildings for cohabitation housing in Korea,” said Byun Jang-heum, a professor who teaches public administration at Sejong University.

“The authorities should consider mitigating related restrictions as well, regarding the construction of cohabitation facilities.”