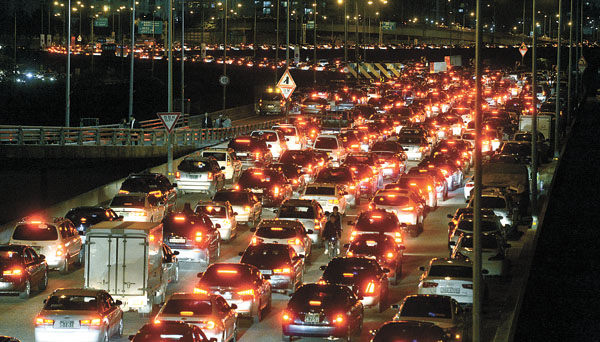 Vehicles jammed the Gangbyeon Highway on Saturday as spectators arrived to watch the annual Seoul International Fireworks Festival in Hangang Park in Yeouido, western Seoul. Many parked their cars on the shoulder of the road despite police warnings. During the show, 110,000 fireworks lit up the night sky. [NEWSIS]

On a highway along the Han River on Saturday evening, a long line of cars sat idle on the side of the road despite signs hung by police that stated that any vehicles parked illegally would be towed.

But those eager to attend the annual Seoul International Fireworks Festival on Saturday evening blatantly ignored those warnings and parked their cars where they could, just as they always have over the past 10 years.

Every year, the police threaten consequences for illegal parking at the event, but their words have never been backed up by action. As a result, the same display of unruly behavior repeats, and this year the shoulder of Gangbyeon Highway was filled with vehicles.

No law enforcement was seen regulating the masses of people on the highways, however.

Hanwha Group, which organized the event - in which pyrotechnic teams from England, China, Italy and Korea participated - dispatched 600 of its employees to areas along the Han River to distribute trash bags and coordinate the show without incident.

At around 6 p.m., a boat with a 12-man capacity capsized about 200 meters north of Magok Bridge in Gangseo District. The 13 passengers, who intended to watch the fireworks display from the river, were all wearing life jackets, however. They were promptly rescued by authorities. After the fireworks display lit up the night sky, large crowds filled the Gangbyeon and Olympic Highways, walking toward their cars, while others attempted to find the nearest subway station.

“As I walked up the stairs to leave the park, I discovered that I was stepping on garbage, not on concrete blocks,” said one visitor surnamed Goh.

The organizer admitted its efforts to mange the event had a “limit” given the size of the crowd and the yearly turnout.

“Over 5,000 people were dispatched to supervise the event. But the number of spectators was too high,” said an official from Hanwha Group, who spoke on the condition of anonymity. “We will put more effort into running the event more smoothly next year.”