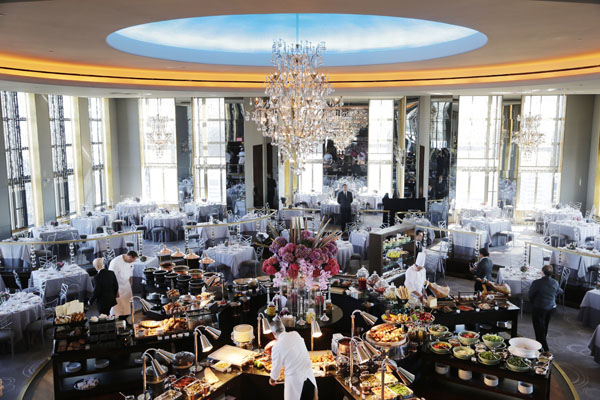 NEW YORK - The Rainbow Room reopened Sunday in its historic perch atop 30 Rockefeller Plaza after a five-year absence from the New York City skyline.

“It’s breathtaking,’’ said Jamie Greenwald, one of more than 200 brunch guests who took in the sweeping views outside and the significant improvements inside the 80-year-old establishment whose floors have been walked across by Cole Porter, Michael Jackson, Elizabeth Taylor, Al Pacino, Barbra Streisand and Muhammad Ali.

The sunny clear blue sky offered no chance for rainbows this day through windows that were enlarged by as much as 25 percent during an extensive renovation designed by Gabellini Sheppard Associates.

The architectural firm also created SixtyFive, a new cocktail lounge adjacent to Rainbow Room that for the first time next year when the weather warms will permit guests to order drinks on a previously vacant outdoor terrace.

Douglas said architect Michael Gabellini made sure to restore aspects of the Rainbow Room including brass railings and crystal bollards that were included in the nightclub’s original design. Montroy Andersen DeMarco was the project’s executive architect.

“Michael really envisions Rockefeller Center being a steamliner that’s kind of charging through New York City and this is the very top of the ship,’’ Douglas said.

The Rainbow Room closed five years ago amid a landlord-tenant dispute. Two years ago, the city granted landmark status to the iconic venue on the building’s 65th floor.

Douglas said the famous rotating dance floor was refurbished by the grandson of the man who installed it in 1934. He said he replaced outdated metal technology with new rubber wheels that are “quiet as can be.’’

Douglas said they found confetti from the 1940s when they lifted the dance floor.

As the restaurant prepared to open, Michael Arenella And His Dreamland Orchestra tested the microphones at a place that over the decades has featured music greats Tommy Dorsey, Guy Lombardo, Louis Armstrong and Tony Bennett, among many others.

Pianist Jesse Gelber was leaving, though, before the crowds arrived.