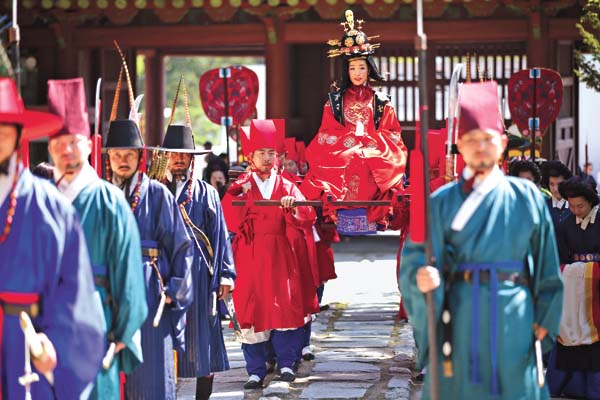 Being an extra in a parade or at an event is just one unique temporary job that doesn’t require specific experience or a particular age. Contributing writer Kang Seung-han hauled a palanquin carrying a queen in a parade recreating a Joseon Dynasty (1392-1910) ritual at Jongmyo Shrine, Jongno, central Seoul, last month. By Kim Chun-sik

Many people in their 20s opt for temporary jobs while they look for full-time employment.

These young people usually search for work that lasts just a day to ensure it doesn’t interfere with their studies or career opportunities.

But while it’s easier to get a stop-gap position rather than a full-time job, the “easier” part of making money ends there, and the true graft starts.

As a contributing writer to the JoongAng Sunday, an affiliate of the Korea JoongAng Daily, I tried three different temporary jobs for three days, focusing on the most unique, weird and painstaking positions out there.

For my first temporary job I was a paid wedding guest. All I had to do was show up at the ceremony of a bride and a groom who were embarrassed by the lack of people coming to witness their vows.

I was expected to act as if I had known the bride for quite some time, appear in photos taken on the day and eat a free meal.

Around 6 p.m. on the day in question, two young couples and three men and women, who all appeared to be in their 20s, gathered for a briefing.

We were given set times to enter the wedding hall where the ceremony would be held.

The two couples went in first, while the rest of us waited outside the venue.

When my turn came, I went into the waiting room where the bride welcomes her guests. 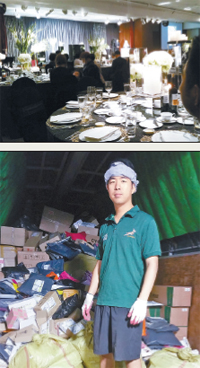 Top: Being a paid guest to a wedding was the easiest way to make the most money in the shortest amount of time according to Kang Seung-han’s on-the-job research. Bottom: Working a temporary shift at a logistics company’s distribution center may be the most painful job, where one person moves around 6,000 boxes for 11 hours.

Usually, the waiting area is crowded with people who want to get a sneak peak of the bride before the ceremony starts, but the room was empty, with just the bride and a photographer.

I was asked to act as an underclassman from the bride’s college. I said a very awkward “hi” to her and found my seat in the main hall.

The venue was more luxurious than I thought it would be.

The ceremony began. While I barely paid any attention, at one point I overheard the emcee saying the phrase “truthful marriage” among his comments, which I felt was rather ironic.

After the ceremony, the time finally arrived where all the paid guests were supposed to come under the spotlight.

All guests, whether paid or not, gathered near the altar for a photo. But some must have looked very indifferent compared to the couple’s real friends.

“Why do some of you look so scary?” the photographer joked “Are you guys part-time paid guests?”

While some of the attendees burst into laughter, the bride and groom seemed uncomfortable about the comment.

The photographer then asked who would be receiving the bouquet.

In Korea, brides usually choose a friend in advance to catch the bouquet.

But no one stepped up, so the manager who had been directing the paid guests pushed one of his employees to the front.

This woman not only got a free meal worth 70,000 won ($65) and payment for attending the wedding, she also nabbed the bride’s bouquet.

After the wedding had almost wrapped up, the approximately 20 people that had gathered earlier met again. Each received an envelope filled with cash and went their separate ways.

Our paid work officially began at 7 p.m. when we entered the venue and lasted to the end of dinner.

The manager who worked with the fake guests said that even the mother of the groom was a temporary worker. Those who impersonate direct family members are usually explained after the wedding with excuses such as that the parents got divorced or decided to move overseas.

The most interesting opportunity

While being a fake guest at a wedding may require job-seekers to be of a specific age or gender, acting as an extra in a parade is less demanding.

One weekend morning, I was part of a crowd standing in front of Jongmyo Shrine in Jongno District, central Seoul. We had gathered to be part of a demonstration that would recreate ancient Joseon Dynasty (1392-1910) ancestral rituals.

Some people, who seemed to have undertaken similar work before, had grown their mustaches in the style of scholars from the Joseon period.

Again, a manager came up and assigned us to different positions.

I was hoping to get a role as a higher-level aristocrat but instead was told to haul a palanquin carrying a Joseon queen instead.

Another worker told me I was lucky to get the part. Others, who were to work as high-level officials, had to stand in line all day under the scorching sun, but I only needed to carry the palanquin for about 10 minutes.

After we changed into traditional Korean garments, the manager came back in and told us all that we were not allowed to look at the queen, as per protocol in Joseon times.

I kept my eyes focused on the ground the entire time. The only thing I could see was the bottom layer of the dresses the queen and her assistants wore. But that moment of feeling like I was in the Joseon caste system didn’t last long. I soon had to carry the litter right on my shoulder.

Eight people shared the weight, but the sweat still started to run down my back.

After the rehearsal, I got a chance to talk to many of the aristocrats or royal family members I wasn’t even allowed to look at earlier.

One 25-year-old student said that he came to work so that he could pay for his acting class.

“I wanted to go to college and major in theater, but I failed to get into school three times,” the student said.

“When I work as an extra in such events, I can at least vicariously experience what working on a film set would be like. So, in another sense, I’m here for my future.”

It wasn’t just students in their 20s who came for the temporary job. To make 40,000 won, workers at smaller companies or suppliers at regional governments signed up, too.

At 1 p.m., we started to put on makeup to look more like the characters we were playing. Some drew on mustaches or attached fake facial hair to show differences in social status.

It was relatively easy for me since all I needed to do was draw a quick stroke on my face.

After taking a day off, I went to work for a shift at a logistics company’s distribution center. This temporary job is notorious among part-timers for its arduousness because you have to load and unload packages for 11 hours at night.

I got on the bus after writing down my personal information. After around a two-hour ride, I arrived in Okcheon, where all the packages from across the country are collected.

The work is pretty simple. You pick up packages and pile them on a truck for 11 hours.

After the screech of a whistle at 8 p.m., dinner was served. We had just 20 minutes to eat seaweed soup and some rice.

One of the more seasoned workers told me that I had picked the worst possible day to come in. In September the packages are heavier since it is harvest season, and Mondays are usually the busiest shift because workers have to take care of stock that piled up over the weekend. I barely had the luxury of paying attention to what he was saying, however; boxes started to come at me on the conveyor belt.

I had to focus on not making mistakes. If I was not extra cautious, liquid items could leak and ice boxes , which usually contain smelly food such as kimchi, fermented sauces or other side dishes, could break and easily ruin other packages.

A burlap sack usually includes 20 small boxes that weigh up to one kilogram. Since these packages are different in shape to the usual rectangular boxes, it is very difficult to create a neat pile. I also needed extra power to throw them into the truck.

There is no break time at the distribution center. When there seems to be fewer boxes on the conveyor belt, workers take turns to grab a two-minute rest. After my drinking water ran out, I used my short time off to run to a vending machine and get a drink.

Maybe it was because I was sweating so much, but I didn’t need to go to the bathroom at all that day, even after hydrating myself with a few drinks.

If a person is clumsy, they usually get yelled at. If a worker is unskilled and slow, it means that more experienced, skilled personnel have to toil harder for the same pay.

At 2:30 a.m., a director gave a sharp shout. The conveyor belt stopped. One of the part-timers fell under the rail. Fortunately, they were not injured and were escorted out to the terminal.

After some whispered talking, the belt started to move again. We only had smaller boxes left to cart off at around 5:30 in the morning.

Throughout the shift, I had hit my knee on a rail, stubbed my toe on the edge of a box and had not been able to stretch my back for hours. My arms and neck were screaming out in pain.

In total, I placed 6,000 boxes onto the truck that would travel to Gumi from Okcheon.

After sunrise, we got back on the bus to get home.

“This work is something that makes you curse, but whether I like it or not, I have to come back to work the shift because I got myself into a car accident,” one temporary staff member said on the bus back home.

“I need to pay back around 2 million won and I have no other way to make that amount.”

I passed out when I got home. When I woke up it was already after sundown and my whole body ached.

For working three different temporary jobs for three days, I made 150,000 won - barely enough for me to purchase up to four textbooks for school.

If I were to take five classes, I would need to make more money to buy maybe two more textbooks. And if the money ran out again, I would have to fake clap at a wedding, carry a palanquin and carry 6,000 boxes again.

A college friend I met on the weekend told me that having to undertake temporary work to survive means that they often miss out on internships.

But not working these jobs is unimaginable because the temporary workers do not have any other sources of income. The friend said it is like being in a vicious circle with no way out.

Throughout my experience, I felt like living life shouldn’t be so hard. I wondered whether things would improve for these people if they managed to graduate from college or find a permanent job.