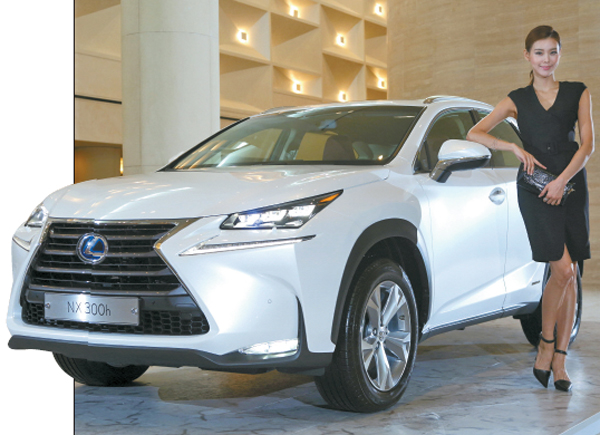 A model poses next to the Lexus compact crossover SUV NX 300h at the Hyatt Regency in Incheon yesterday. Provided by the company

Lexus’s compact crossover SUV NX 300 hybrid, or NX 300h, was unveiled at the Hyatt Regency in Incheon and is the first of its kind from the company to be introduced to Korea.

Lexus said it decided to enter the small SUV market as demand for the vehicles has been growing, along with the popularity of outdoor activities such as camping.

According to auto industry sources, the number of SUVs sold in the country in September accounted for 29.2 percent of a total 94,834 vehicles sold by five local manufacturers, including Hyundai and Kia Motors.

The NX 300h uses the hybrid drivetrain adapted from the IS 300h and GS 300h, which combines the 2.5-liter four cylinder Atkinson cycle petrol engine with an electric motor to drive the front wheels. The addition of an electric motor for the rear axle makes the NX 300h capable of four-wheel drive.

It uses the Lexus E-Four all-weather drive system with an electric motor to drive the rear axle and distributes torque to the rear wheels, depending on road conditions. The system reduces the chance of wheels spinning while accelerating on slippery roads.

The NX 300h has an average fuel economy of 12.6 kilometers per liter (about 29 miles per gallon) and a maximum torque of 21 kilogram-meters.

In Korea, it will be sold in two models - Supreme and Executive. The starting price for the Supreme model is 58.6 million won ($54,791) and the Executive starts at 63.8 million won.

Lexus said it worked for two years to develop the sharp and sporty look of the exterior, which has LED headlights, LED light spears, a spindle grille and 3-D taillights.

Kato Takeaki, chief engineer of Lexus International who directed the NX models’ development, said that the NX 300h is the total package, and that its high-end SUV technology and exterior design will be adapted to Lexus’s next-generation cars.

“We will strengthen our stature in Korea’s premium car market with the NX 300h and ES 300h,” said Lexus Korea President Akihisa Yoshida. “I think this model will be a piece of ‘gear’ that anyone would want to own as drivers can enjoy both urban and outdoor life.”