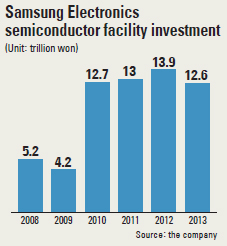 Samsung Electronics yesterday announced it will build the world’s largest chip-making facility in Pyeongtaek, Gyeonggi, at a cost of 15.6 trillion won ($14.6 billion).

The flagship company of Samsung Group signed an agreement with Gyeonggi Province, Pyeongtaek City and the Gyeonggi Urban Innovation Corporation yesterday for the tech giant’s new semiconductor production base in Pyeongtaek’s Godeok Industrial Complex, about 70 kilometers (43 miles) south of Seoul.

The facility will be built on a 2.83-million-square-meter (699-acre) site, which is nearly the size of Yeouido in western Seoul.

Samsung said a chip-manufacturing facility will be built on 790,000 square meters of land initially, and it will soon decide details of how to use the rest of the land. 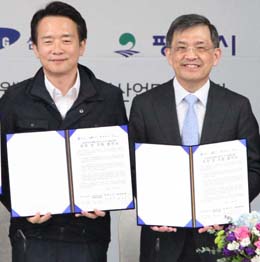 “The semiconductor industrial zone to be established in Pyeongtaek will have an important role in the future of Samsung’s semiconductor business,” said Kwon Oh-hyun, CEO of Samsung Electronics.

Construction is scheduled to start in the first half of next year, with production expected to get under way in 2017.

Originally, the plant was to open in late 2018, but Samsung moved up the date at the request of Gyeonggi and Pyeongtaek to help boost the local economy.

Samsung estimates the investment - its largest ever for a semiconductor facility - will generate about 150,000 jobs and have an economic impact in excess of 40 trillion won.

“Not only Gyeonggi residents but the world is eyeing this investment decision, which will make Samsung the world’s top chip maker,” said Gyeonggi Gov. Nam Kyung-pil.

With the new plant, the company said it aims to have a “high-tech semiconductor cluster” that connects its other plants in Gyeonggi - Hwaseong and Yongin. In the past four years, the tech giant has invested about 50 trillion won in the chip business. It also has a semiconductor plant in Texas and three in China.

Samsung said it hasn’t decided which type of chips it will produce at the new plant.

“The market situation for memory chips is not bad and we expect continuous growth based on the mobile business,” said Kim Ki-nam, head of Samsung’s memory chip business division. “We also expect some changes in the area of system chips, so the company will soon make a decision after reviewing market conditions.”

Kim said having another chip facility will not cause an oversupply problem.

“Although there are concerns over a possible oversupply of memory chips, the smartphone market is going well and there is continuous demand from areas like wearable devices, automobiles and the data center,” said Kim.

Industry insiders said Samsung decided to build the new plant to reinforce production ability that can quickly adapt to new technologies for future growth in such areas as robotics, smart homes and the Internet of Things.

Speculation has been rising that Samsung’s third-quarter performance, which is due out today, will be poor because of its underperforming mobile business that is challenged by Apple, which has introduced bigger-screen iPhones, and Chinese companies that are flooding the market with low-cost devices.

However, Kim said profitability in Samsung’s chip business will not be a big concern.

“You don’t have to relate Samsung Electronics’ overall performance concerns with its parts business,” said Kim.

In the semiconductor business, he added, “There are still lots of things that we can do.”

Meanwhile, Samsung’s investment accounts for more than half of a 28.4 trillion won plan by 16 companies disclosed to the government at a meeting yesterday. The companies include Samsung Electronics, Hyundai Motor, LG Electronics, SK Energy, LG Chem, Samsung Display and SK Hynix.

The 16 CEOs unveiled their investment plans yesterday morning in Seoul at a closed-door meeting hosted by the Ministry of Strategy and Finance and the Ministry of Trade, Industry and Energy.

The Trade Ministry later said the companies will invest a total of 28.4 trillion won by the end of next year in at least 10 projects, some of which can begin this year.

Other than Samsung Electronics, the 15 remaining companies said they expect to barely maintain last year’s level of investment of about 1 trillion won each.

While declining to reveal details of their plans, they said most of their investment will likely go for the basics, such as expanding R&D centers and maintenance of existing facilities.

Many said they are struggling due to external factors like the weak yen and local regulations.

“This year, the company started to narrow down investment to only necessary areas,” said one of the attendees at the meeting, who declined to be identified.

Authorities promised they will do their best to support the companies’ investment plans by pushing local governments to expedite construction permission and provide better electricity supply and other basic infrastructures for production facilities.

“The ambience of resurgent investment has recently started to return to the nation’s business community and to large private and public companies like Samsung Electronics, LG Electronics and the Korea Electric Power Corporation,” said Yoon Sang-jick, the minister of trade, industry and energy.

“It is our [government’s] role to assist companies with policies tailored to each company and reform any regulations that are obstacles to investment, to help them achieve their investment goals as soon as possible.”

Regarding CEOs’ worries about the steadily weakening yen, Yoon said he hopes the companies “think outside the box and consider this as an opportunity to complete their investment goals in advance, as Japanese-made resources are cheaper because of the weak yen.”