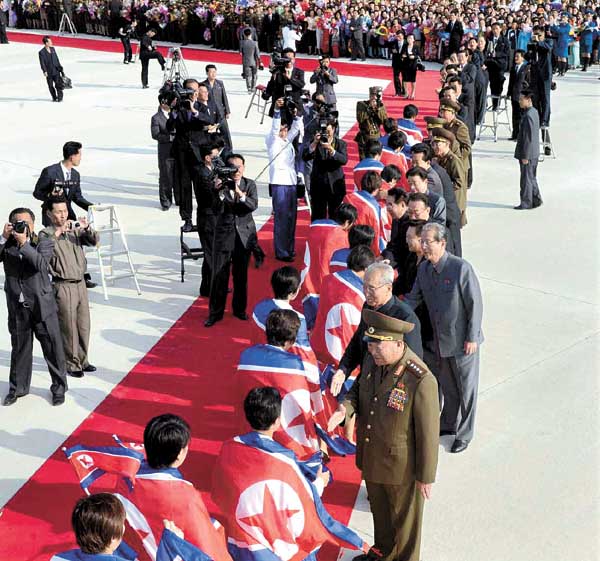 Ruling and opposition lawmakers called on the government yesterday to lift sanctions against Pyongyang in order to maintain the momentum from a visit over the weekend by a delegation of high-ranking North Korean officials.

The group’s trip to the South ostensibly to attend the closing ceremony of the Incheon Asian Games was widely interpreted to be the latest breakthrough in inter-Korean relations.

Saenuri Party Chairman Kim Moo-sung said yesterday that it was promising to see such rare progress in the two Koreas’ stalled relationship.

The government and the ruling party must “boldly work together to improve the relations between the two Koreas,” he added at the Saenuri’s senior leadership meeting.

North Korea dispatched an 11-member delegation to South Korea on Saturday that included Vice Marshal Hwang Pyong-so - presumed to be the regime’s second most powerful man - to attend the Asian Games’ closing ceremony.

The men also met with top South Korean officials, including Kim Kwan-jin, the Blue House national security chief, and agreed to restart high-level government contact at the end of this month.

“The government must tie up pending inter-Korean issues,” Kim said, “and approach each matter carefully.”

However, he did not elaborate on what those issues were.

Kim Tae-ho, another senior Saenuri Party leader, made a more specific demand to the Park Geun-hye administration, urging Seoul to lift the economic sanctions against Pyongyang, better known as the May 24 measures.

The delegation’s visit “contains the message that the deadlock in bilateral economic cooperation since the May 24 measures should be resolved,” Kim said. “And we must respond boldly.”

The May 24 measures were a series of economic sanctions against the North adopted in 2010 after Pyongyang torpedoed South Korea’s Cheonan warship. It bars all trade and exchanges with North Korea.

It is rare for the conservative ruling party to consistently urge the government to engage with the regime.

Until now, South Korea’s liberal opposition parties, including the main New Politics Alliance for Democracy (NPAD), have pressured Seoul to end its economic penalties, calling the sanctions an obstacle hindering a better relationship.

Saenuri Rep. Yoo Ki-june, another presidential confidant who heads the Foreign Affairs and Unification Committee in the National Assembly, also said yesterday that the May 24 measures should be lifted.

In an interview with MBC radio, Yoo said South Korea must hold the North accountable for its actions, though it has become undesirable and ineffective for Seoul to maintain the sanctions.

Similarly, another Saenuri lawmaker, Won Yoo-chul, said in an interview with KBS radio yesterday that the time has come for the South to seriously reconsider the May 24 measures.

“The government must make a bold move to end the May 24 measures and restart the Mount Kumgang tour program,” interim NPAD Chairman Moon Hee-sang said yesterday.

“It’s all about timing for diplomacy and politics. When an opportunity comes, you should seize it,” he said. “When your rival reaches out for your hand, you should grab it. This is the perfect timing for the two Koreas to escape from this seven-year period of darkness.”

Rep. Moon Jae-in, the former presidential contender for the opposition, went further to urge President Park to hold an inter-Korean summit. “Park must have the summit by the end of next year at the latest in order to see real progress,” he said.

Yesterday, the president made clear her intention to keep the momentum alive, calling the agreement to hold a high-level meeting a “turning point” in ties.

“High-level contact must not just be a one-time show,” she said yesterday at a senior secretariat meeting. “The two Koreas must have talks on a regular basis to pave the way for peaceful unification.

“I have expect that North Korea will sincerely act upon its will to improve inter-Korean relations that it expressed during the officials’ recent visit,” Park continued. “The two Koreas this time agreed to hold a second round of high-level contact, and the agreement is meaningful because it provides a turning point in inter-Korean relations.”

Park’s remark on holding regular inter-Korean talks is something she has previously and repeatedly stressed, a senior Blue House official said. “She did not say it because the two Koreas had a specific discussion on it at the recent meeting,” he said.

However, the Ministry of Unification yesterday responded carefully to the intensifying political pressure to lift sanctions. Ministry spokesman Lim Byung-chul reiterated the government’s earlier stance that the May 24 measures will only be lifted when the North acts responsibly to convince South Korea of its sincerity in cooperating.

At the briefing, Lim said Seoul will urge Pyongyang at the upcoming talks to hold more reunions for the families separated by the 1950-53 Korean War. The two last held family reunions in February 2014, after they had been suspended for years because of poor relations.