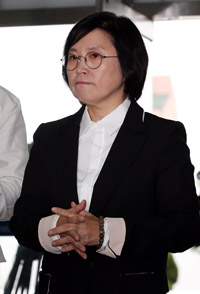 
The opposition New Politics Alliance for Democracy publicly apologized yesterday over allegations that one of its lawmakers was involved in a physical confrontation with a driver-for-hire and two passersby.

The acknowledgment came 19 days after the incident, which has put the party in an uncomfortable position amid growing public criticism.

“Regardless of the reasons as to what led to the incident, I wish to offer a sincere heartfelt apology to the people over the trouble that one of our lawmakers has caused,” interim NPAD Chairman Moon Hee-sang said yesterday during a meeting with the party’s leadership at the National Assembly.

The scuffle for which the party leader apologized implicates Rep. Kim Hyun, a first-term lawmaker elected through the proportional system, who allegedly hit a driver-for-hire after the man said he would leave because he could not wait longer.

Also implicated in the scandal are three relatives of Sewol ferry victims, who formerly held leadership positions in the Sewol Family Countermeasure Committee, which represents the family members of the 11th-grade Danwon High School students who died in the April 16 disaster. Kim and the three men were reportedly drinking late on the night of Sept. 17 near the National Assembly when they called a driver-for-hire.

Kim, known as a hardliner within the NPAD, emerged as a formidable advocate for the bereaved relatives, and sided with the families’ demand that a fact-finding committee to be established under a special Sewol law be empowered with the authority to investigate and indict suspects.

The bill is intended to get to the bottom of the tragic sinking, which left more than 300 people dead.

Noting Kim’s active role in supporting the families, Moon remarked that the troubled lawmaker had dedicated herself to “healing the wounds and sorrow” of the Sewol victims’ families.

“She has always sided with the bereaved families who lost their beloved children as the mother of a daughter,” he said.

In offering an apology, the main opposition also transferred Kim from the parliamentary Security and Public Administration Committee to the Foreign Affairs and Unification Committee. Lawmakers judged that it was not appropriate for her to work on a panel that supervises the police at a time she is being questioned over allegations of assault.