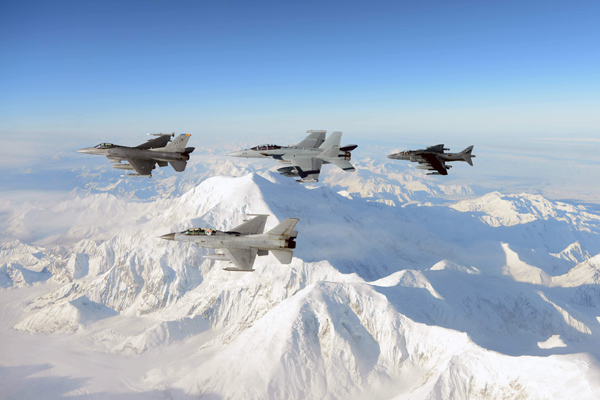 A KF-16 fighter jet, front, soars in the sky with three other U.S. fighter jets during a Red Flag - Alaska drill held at Eielson Air Force Base, approximately 26 miles southeast of Fairbanks, Alaska, Friday. From left behind the Korean jet is the F-16CM, the EA-18G Growler and the AV-8B Harrier. The national jet left the Seosan Air Base in Seosan, South Chungcheong, on Sept. 25, to participate in the two-week tactical air combat exercise that replicates the initial combat sorties of a conflict, marking the first time a fighter aircraft of its kind has crossed the Pacific Ocean. [NEWSIS]