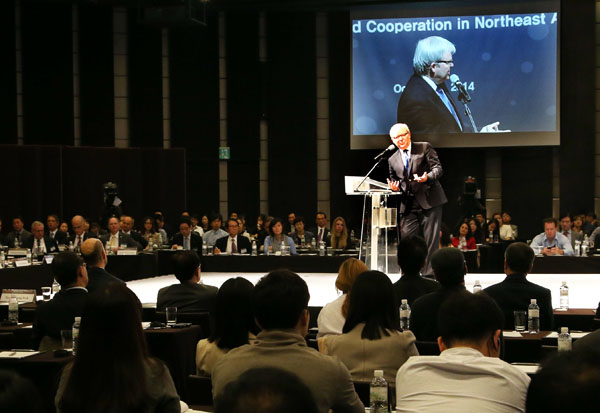 Kevin Rudd, the former prime minister of Australia and a distinguished visiting fellow at Chatham House, speaks to some 250 participants yesterday at the first J Global-Chatham House Forum at the Westin Chosun Hotel in central Seoul. By Kim Kyung-bin

The visit by a high-ranking North Korean delegation to the South over the weekend was welcomed by leading international scholars and served as an overarching topic yesterday at the J Global-Chatham House Forum 2014 in Seoul.

“The entire international community welcomed the most recent visit by the highest-level delegation from North Korea, and perhaps the highest level of exchange in the last six years. This is of itself significant,” said Kevin Rudd, the former prime minister of Australia and a distinguished visiting fellow at Chatham House.

The inaugural forum, a collaborative effort by the Royal Institute of International Affairs, a British think tank that is also known as Chatham House, the JoongAng Ilbo, JTBC and the Yumin Cultural Foundation, kicked off at the Westin Chosun Hotel in central Seoul. It centered on the topic, “Peace and Cooperation in Northeast Asia.”

On Saturday, a delegation from Pyongyang led by Vice Marshal Hwang Pyong-so, considered the second most powerful man in the regime after North Korean leader Kim Jong-un, made a surprise visit to the South to attend the closing ceremony of the Incheon Asian Games and met with South Korea’s Prime Minister Chung Hong-won and National Assembly leaders. 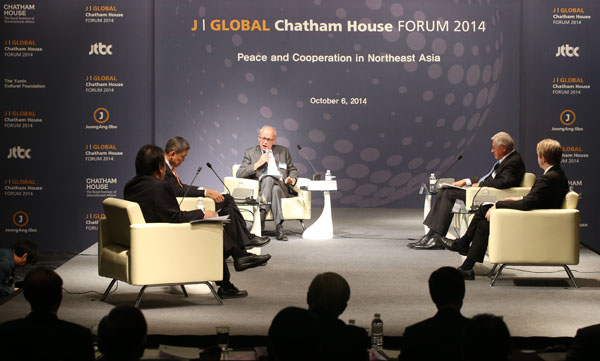 A group of experts on Asia, led by Lord John Kerr, a member of the British House of Lords, discuss the topic “Restructuring the International Order in East Asia: Lessons from Europe” yesterday at the first session of the J Global-Chatham House Forum.By Kim Kyung-bin

“How significant it would be will be determined over time,” Rudd added during his keynote address at the forum in regard to the meeting among North and South Korean officials.

In terms of how this diplomatic gesture from Pyongyang came about, Rudd continued, “Our good friends in Beijing have been very active on this.”

He also referred to Chinese President Xi Jinping’s visit to South Korea in July, which came before a visit to Pyongyang.

“The Chinese leadership desires a good relationship with South Korea,” he said, “and they know that South Korea’s bottom line for future improvement in that relationship lies in what our Chinese friends can do to induce a more cooperative attitude on the part of those in the North.”

He encouraged Pyongyang to sustain such contact in the future and went on to appeal to North Korean leader Kim Jong-un to set an example by looking to German leaders and “become a great figure in history, not just on this peninsula, but in Asia and across the world.”

Rudd said, “I would appeal to Kim Jong-un to look beyond the decades of poverty and conflict and war that he has inherited from the past and to seize the day and to choose instead a different future for his country and his people.

“That is the business of leadership, to open the 38th parallel in a way that European leaders did a quarter of a century ago when the Berlin Wall fell.”

In his opening remarks, Hong Seok-hyun, the chairman of the JoongAng Ilbo and JTBC, called the delegation’s visit a “diplomatic surprise.”

“Over the weekend, North Korean leader Kim Jong-un grabbed headlines again with a diplomatic surprise, a diplomatic coup,” he said. “This shows us just how quickly the situation can develop on the Korean Peninsula.”

Amid such an environment, he noted that the major players in the region, South Korea, Japan and China, “have not been able to find common ground on a long list of issues, from territorial disputes, differences over history, to North Korea, all the while competing for greater economic influence in our respective domestic and global markets.

“Northeast Asia has its fair share of tough problems that could boil over into dire conflicts if not managed and resolved in time,” Hong added.

Pointing out that European integration took some 60 years to build up to where it is today, he continued, “Considering the faster pace of change in East Asia, perhaps we can achieve that sort of integration in a relatively shorter span of time, and where better to get the discussions rolling than at a forum like this.”

Experts in foreign affairs, security and economics, including Robin Niblett, the director of Chatham House; Jane Perlez, the chief diplomatic correspondent in the Beijing bureau of The New York Times; Jia Qingguo, the dean of the School of International Studies at Peking University; Theo Sommer, Die Zeit’s editor at large; Yamaguchi Noboru, the director of International Programs at the National Defense Academy of Japan; and former Korean Finance Minister Sakong Il, also weighed in on other key regional issues.

The three sessions at the forum discussed lessons to learn from Europe on restructuring the international order in East Asia, bilateral relations between the United States and China, and economic cooperation in the region.

“The key lesson for North Korea now is that it cannot have its cake and eat it, too, as it wishes,” Foreign Minister Yun Byung-se told a group of leading international scholars and government officials at a luncheon during the forum.

“More recently, it has cooled down on China and warmed up to Japan and Russia. … It is against this backdrop that you may have to digest these sudden developments on the Korean Peninsula over the weekend.

“Both sides,” he added, “agreed for a second round of long-overdue high-level talks, either in late October or early November. We hope that the follow-up contacts and meetings could be conducive to building trust and peace, recognizing that we still have a long way to go.”

Yun further warned, “If Northeast Asia flares up in conflict, it will be a global conflagration on a different scale from the events in Syria, Iraq and Libya.”

While he emphasized that the United States is Korea’s most important bilateral partner and that Seoul and Beijing relations are the “best ever since the establishment of diplomatic relations,” he voiced concerns over historical tensions with Japan, including the Imperial Japanese Army’s forced recruitment of Korean women into military “comfort stations” during World War II.

“We want to see Japanese political leaders make a clean break with the past, like German leaders,” Yun said. “This sorry state of affairs, however, does not stand in the way of our bilateral economic, social and cultural cooperation and exchanges, or our close coordination on the North Korean nuclear issue.”

In reference to Prime Minister Shinzo Abe’s unexpected visit to the controversial Yasukuni Shrine, which enshrines Class-A World War II war criminals among its fallen soldiers, the former Australian prime minister Rudd said, “I do not believe that you can simply wave away such problems as repeated visits to the [Yasukuni] shrine in Tokyo.”

Rudd warned that unless the region begins to “craft intuitions with sufficient imagination for the long term to enable common problem solving and common security over time, [it will] always drift back to petty nationalism, territorial conflict and war.”