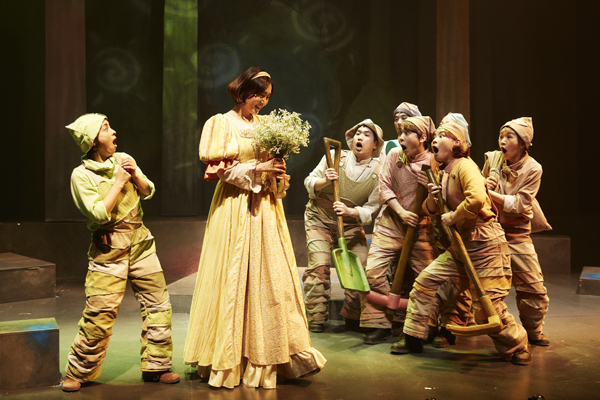 In the musical “A Dwarf Who Loved Snow White,” one of the dwarfs falls in love with Snow White. The show is staged in Daehangno, central Seoul. See THEATER, below. Provided by the organizer

Tonight: Pop diva Mariah Carey is coming to Korea to stage her second solo show. The title of her concert is the name of her latest album, suggesting she’ll be promoting songs from “Me, I Am Mariah” during the performance. This is the star’s first visit to Korea in 11 years.

Tomorrow: Los Romeros consists of four members of the Romero family, Pepe, Celin, Lito and Celino. The world-class quartet was founded in 1958 by legendary guitarist Celedonio Romero. At the concert, the four will play “Leyenda,” “Sevilla” and “Granada” by Isaac Albeniz, tracks from the opera “La Revoltosa,” and more, using classical and flamenco guitars.

Oct. 18: Seo Tae-Ji, the legendary singer from the early ’90s, is making a comeback with his ninth album after a six-year hiatus. This music icon is holding a concert with the theme “Christmalowin.” As this illustrates, the concert will celebrate the coming of both Christmas and Halloween, and Seo’s agency said it’ll be a “brand-new style of music festival.” According to the agency, Seo’s concert will have a top-quality sound system that U.S. heavy metal band Metallica previously used during their world tour.

JANG KIHA AND THE FACES

Oct. 23 to Nov. 2: Considered one of the most successful indie bands, Jang Kiha and the Faces recently released their third full-length album. To celebrate this event, they scheduled a tour.

Hapjeong Station, line No. 2 and 6, the passageway between exit 8 and 9.

Nov. 2: World-famous rock band Mr. Big is returning to Korea to celebrate its eight full-length album, “The Stories We Could Tell.” The band said they were very inspired by Korean fans in 2011 when they last visited. Mr. Big rose to stardom in 1991 with their self-titled album “To Be With You.”

MAKSIM AND HIS BAND

Nov. 5 and 6: Maksim Mrvica, a Croatian crossover pianist, is holding concerts in Korea again with a full band. Lyrical piano music was the mainstream before Mrvica, but his dynamic piano playing, accompanied with electronic sounds and strong beats, has changed the trend. The show features a selection of his popular tracks and music from his newly released album.

Dec. 5 and 6: Jack Black, who is famous for his movies “School of Rock,” “High Fidelity” and “Kung Fu Panda,” is coming to Seoul as part of Tenacious D, the duo he performs in with guitarist Kyle Gass. Known as one of the biggest cult bands in the world, Tenacious D is stopping in Seoul for two days on its Asia tour. Private Curve, the organizer, said it’s been trying to invite the duo for the past five years and “finally managed to organize the concert as an Asian tour, having the Seoul concerts in the core.”

To Oct. 26: Before Superman and Batman came about to protect the weak from evil and save mankind, there was Zorro, who was a century ahead of them as a hero with two identities. In the story, Diego, a runaway mine laborer, is saved by the gypsy Inez. Meanwhile, Ramon becomes the leader of a Californian town and starts to drive the townspeople into poverty under his tyranny. In this moment of hardship, Inez suggests that Diego should become the long lost hero Zorro. Based on the hit songs by the flamenco-infused band the Gypsy Kings, the musical is a fun watch. K-pop idols such as Key from SHINee and Yang Yo-seob from Beast will play Zorro. The show starts at 4 p.m. and 8 p.m. on weekdays, 3 p.m. and 7 p.m. on Saturdays, Sundays and holidays.

To Oct. 26: The Korean production of the steady selling musical “Thrill Me,” which premiered in 2007, is back with cast members Song Won-geun, Shin Seong-min and Lee Jae-gyun, along with new members. The story unfolds with an unprecedented murder case that has a gripping development and a shocking twist. This exhilarating musical will chill audiences.

Shows start at 8 p.m. on weekdays and 3 p.m. and 6 p.m. on weekends and public holidays. There are no shows on Mondays.

Saturday to Jan. 4: The musical “Rudolf,” based on the Mayerling affair - the death of Crown Prince Rudolf of Austria and his lover Mary Vetsera - is being staged in Korea for the second time.

Nov. 1 to Feb. 1: “Marie Antoinette” is being presented in Korea for the first time. The musical conveys a story of two parallel lives; the Queen of France, who is considered France’s most misunderstood monarch, and Margrid Arnaud, a poor woman. But the French Revolution changes everything. Margrid rises as a revolutionary while Marie falls.

This upcoming musical directed by Gina Lee delves into a Dorian Gray-esque theme of trading the soul to the devil.

Set in 20th-century New York, Wall Street broker John Faust makes a deal with Devil X for financial success. But the richer Faust gets, the greedier he becomes, until his wife Gretchen senses that something is wrong.

Nov. 14 to 16: This ballet performance, directed by world-famous choreographer Angelin Preljocaj, will give a feast for the eyes with outfits created by Jean Paul Gaultier, who was the costume director for “The Fifth Element.” Gustavo Mahler’s symphonies have been selected for this production of “Snow White.” The show has been held at famous arts halls around the world, including the Lincoln Center.

To Jan. 10: The story of a princess poisoned by her envious stepmother and revived by a prince’s true-love kiss is most widely known as the fairy tale “Snow White.” This musical has been presenting a musical adaptation of Snow White since 2001, but instead of the princess the performance stars a mute dwarf, Bandari, who harbors special feelings for the protagonist. The audience will learn what love is all about by witnessing his feelings toward Snow White.

Shows start at 8 p.m. Tuesday through Friday; at 3 p.m. and 6 p.m. on Saturdays and at 2 p.m. and 5 p.m. Sunday and public holidays. There are no performances on Mondays.

Oct. 18 to 19: The Grand Mint Festival (GMF) marks its eighth anniversary this year. Now with a bigger lineup and activities, the festival is sure to be a hot attraction during the cool fall days. The first lineup includes the melancholic band 10cm, iconic a cappella group Sweet Sorrow, adorable duo J Rabbit and many more. The festival also aims to convey the importance of nature preservation by holding flea markets.