Mercedes-Benz passes BMW as No. 1 import

Mercedes-Benz passes BMW as No. 1 import


Mercedes-Benz was the most popular imported car in September, beating out its biggest Korean rival BMW for the first time since December 2011.

According to a report yesterday by the Korea Automobile Importers and Distributors Association (Kaida), sales of imported cars rose 3.6 percent, from 16,442 in August to 17,072 last month. 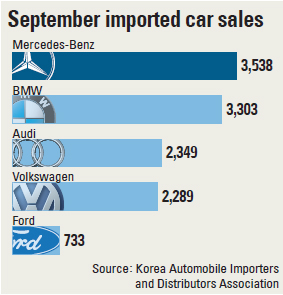 “Introducing a series of new compact segments had an impact on sales,” said a spokesman for Mercedes-Benz Korea. “Vehicles that offer high fuel efficiency, such as the new C-class sedan, attracted drivers.”

The popularity of the Tiguan and Mercedes-Benz’s C-class and E-class shows the changing preference of Korean consumers. While consumers in the past were more focused on style and price, consumers today are more interested in fuel economy.

According to Hyundai Motor, its total sales last month were 263,970 units, a decrease of 2.1 percent compared to August. Kia Motors, which is second in market share, was even worse, selling 193,671 units, a 9.7 percent drop.

This is the first time in 13 months that the Korean automaker has seen a month-on-month sales decline.

The September decline was caused by shrinking demand for the midsize Sonata LF. In January, the company sold 13,000 units, compared to 4,353 last month, according to industry sources.

“Many potential buyers who were waiting for the Sonata might have been disappointed in its fuel economy,” said analyst Lim Dong-heon. “More drivers are looking for a car with a diesel engine to save money, but since Hyundai and Kia Motors are preparing diesel models, they will soon get better in the domestic market.”