New to the bottled water battle

New to the bottled water battle 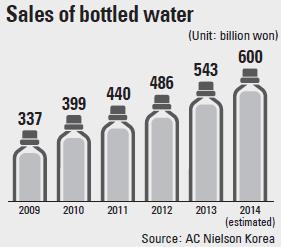 The bottled water market has become a battleground for major food and dairy companies as business has become more lucrative because of the increasing number of single-person households and health-conscious consumers.

The market size is expected to surpass 600 billion won ($561 million) this year, double the value five years ago.

This year, the growth has attracted new players to the sector once dominated by a single product, Kwang Dong Pharmaceutical’s Jeju Samdasoo. And the newcomers are looking to detract from Samdasoo’s 40 percent market share.

Namyang Dairy Products joined in earlier this month with its bottled water Chunyeonsoo.

The dairy company said it will use its existing distribution and marketing channels with the aim of securing 10 percent of market share within two years.

“The water business will be one of our biggest sectors,” said a public relations official for Namyang. “The business is resilient to external factors and has shown stable growth.”

Nongshim, which owned the rights to sell Samdasoo prior to 2012, came back with a new water called Baeksansoo in 2013. The bottled water from Mt. Baekdu has gradually gained popularity. Nongshim said that Baeksansoo’s market share reached a high of 5 percent this month.

And the food company has taken its product overseas. Three months ago, it held a groundbreaking for a plant in Jilin, China, with the capacity to produce one million tons of mineral water a year. Up to 80 percent of it will be sold in China.

Nongshim invested 200 billion won in the new facility, which will be located on a 300,000-square-meter (74-acre) site with a floor area of 84,000 square meters and is expected to be operating by September 2015.

Despite intensifying competition, Samdasoo kept a 42.5 percent market share as of August, according to market researcher AC Nielson. The second-biggest share, 8.8 percent, was held by Lotte Chilsung Beverage, and Haitai Beverage’s Pyungchangsoo had 6.3 percent.

More foreign companies are also seeing success in Korea with their bottled water. A record high of $3.75 million worth of foreign bottled water was imported in May, according to the Korea Customs Office.